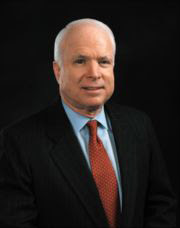 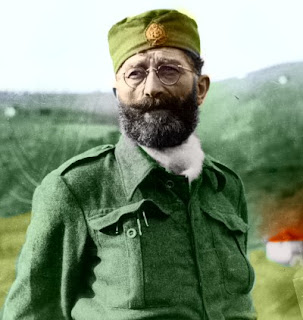 NOTE - Major Richard Felman had many stories to tell about his experiences during his 50 year effort to inspire official recognition of the heroic contributions made by General Mihailovich and his Serbs to the Allied cause during World War II. Of the many that he conveyed to me personally over the years, his experience with Senator John McCain, who was his senator, was among those that left him the most disappointed. I know that if Richard Felman were alive today, he would be reminding John McCain of their meeting below.

By Richard L. Felman
TUCSON, AZ. The recent glut of news stories proclaiming our government's all-out effort to get at the truth about missing servicemen in Vietnam in reality was nothing more than election-time grandstanding.
It brings to mind the political maneuvering behind the scenes that I personally experienced in another MIA situation. As a group of former MIAs, we have had 47 years of firsthand exposure to the depths to which our State Department will sink to withhold the truth about MIAs from Congress and the American people if it will interfere with its foreign policy of appeasement.
During World War II, I was one of more than 500 American airmen listed as missing in action for periods of up to 18 months after being shot down over German-occupied Yugoslavia.
Only through the courageous efforts of General Draza Mihailovich's anti-communist guerrilla forces were we able to avoid capture, be gathered up at a central point and air-evacuated to safety at our bases in Italy.
To this day, the "Halyard Operation" remains the largest one-time rescue of Americans from behind enemy lines in our nation's history. For political reasons, it has been covered up by our State Department.
During a recent visit to the archives at the Air Force Academy in Colorado Springs, authorities at the highest level told me they could not believe there had been no record of such an historic rescue in their files.
Since the end of World War II, our group has petitioned Congress to allow us to publicly express our gratitude to those on foreign soil responsible for saving our lives while we were serving in defense of our country. Unfortunately, we have been fought every step of the way by the State Department's fear that the truth would offend the postwar communist government of Yugoslavia.
Even though that government no longer exists, the State Department continues to this very day to vigorously oppose the bills we now have before Congress, which have the support of the 8 million members of the American Legion, Veterans of Foreign Wars and the Air Force Association.
At the local level, we have been supported by the Arizona State Legislature, the Arizona American Legion, the Tucson Veterans Affairs Committee, former Sen. Barry Goldwater, former U.S. Rep. Mo Udall, and former Gov. Rose Mofford.
The political ramifications of this deception have been so far-reaching that our recent appeal to Dante B. Fascell, chairman of the House Committee on Foreign Affairs, parroted the standard State Department denial together with the following explanation: "What is at stake concerns not simply the sensitivity and opposition of the official Yugoslav government, but also several ethnic groups in Yugoslavia as well."
It sets a terribly frightening precedent when the legitimate requests of American citizens on an internal matter are opposed by the U.S. government on the basis that it might upset some foreign government and its ethnic groups.
Worthy of mention is some background of our ongoing struggle. In 1977, the U.S. Senate passed legislation granting our committee permission to erect a simple memorial in Washington to be financed with private funds. Nine days after the bill passed, the American ambassador to Yugoslavia, Lawrence S. Eagleburger, fired off his protest conveying the Yugoslavian government's "extreme distaste for the Senate move."
In a strongly worded recommendation against "further action," his letter stated: "Passage by the House of this legislation would have an extremely adverse impact on our bilateral relations with Yugoslavia. Rightly or wrongly, the Yugoslavs look upon the bill as a provocation and would react to its passage accordingly."
This stand has been the etched-in-stone policy of the State Department ever since and the reason why our bills have never gotten out of the House committee.
It should be noted that after serving as Ambassador to Yugoslavia, Eagleburger left the State Department and earned more than $900,000 a year as a director of a Yugoslav bank later convicted of money laundering and as a director on the board at Yugo Cars. After Yugo Cars went broke, Eagleburger returned to the State Department, replaced James Baker, and is now acting Secretary of State.
My hopes for finally uncovering the truth were raised when we elected U.S. Senator John McCain, R-Ariz., to represent us. I felt he could identify with what it meant to be rescued, since he was shot down in enemy territory and endured five years of torture in Vietnam.
It took me almost seven years to get an appointment with him. While expressing sympathy for our effort, McCain told me he could do nothing. Instead of calling for the investigation I requested of our serious charges - withholding the truth from members of Congress and using taxpayer funds to disseminate communist propaganda are federal offenses – he told me the only way to get at the truth would be for me to write the 435 members of the house of Representatives and get a majority of them to support our effort.
I thought the reason the people of Arizona elected politicians was to represent them in Washington.
At this point, our disillusioned group of aging veterans has given up trying to repay our nation's debt of honor to those on foreign soil who saved American lives. After risking our lives and watching our buddies in combat get their arms, legs and heads blown off, we returned home to find an uncaring bloated bureaucracy that treated our service to country with contemptuous disregard.
After 47 years of disappointments our noble effort has failed. How can we expect the government to level with the American people about the MIAs in Vietnam, when they are still covering up the truth about the MIAs from World War II?

*******************
Richard L. Felman of Tucson, now deceased, was a retired Air Force major and president of the "National Committee of American Airmen Rescued by General Mihailovich."