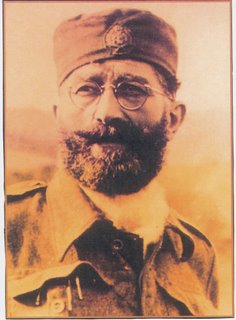 "I salute a brave Officer...who, faithful to the end...met an undeserved death with unflinching courage."

Brigadier Charles D. Armstrong was a World War Two British Liaison Officer who was the last chief of the British Army Mission to be stationed at the headquarters of General Draza Mihailovich, September 27, 1943-June 1, 1944.

The following tribute to General Mihailovich was from Brigadier Armstrong's rememberance in 1966 honoring the 25th anniversary of the uprising in Yugoslavia and the 20th anniversary year of the General's passing.


Twenty five years ago the Royal Yugoslav Army, knowing inevitable defeat would be their ultimate fate, stood determined to face the German blitzkrieg. This defiance delayed the Germans for [five] weeks in their attack on Russia, sufficient time as it turned out, for the Russian winter to set in and save Moscow. A magnificent victory in defeat for the Royal Yugoslav Army. From the holocaust in Yugoslavia some gallant remnants made their way into the mountains and there, around Draza Mihailovich, a growing army of Chetniks, lacking arms but certainly not courage, planned further resistance to the invader.

By 1942 news of this shadow force was trickling out of the Balkans and we in the West heard that many, who had escaped capture, were now organized into a fighting force under the command of a Colonel Mihailovich. Little else did we know at that time. First Colonel Hudson who was landed from a submarine and later Colonel Bailey made contact with the new leader which resulted in more definate news reaching us.

It was not until the Summer of 1943 in North Africa after completion of that campaign that I was given the opportunity to parachute into General Mihailovich's H.Q.

After three abortive attempts, during which time the General had waiting on the landing ground, my pilot found the dropping zone. This time Mihailovich had retired to bed doubting I would ever arrive.

At our first meeting the next morning I was most courteously welcomed but could not help feeling this quiet, blue eyed and heavily bearded man studying me through thick lensed glasses was pondering the reason I had come.

He had not asked for me. I suppose you might say I had been thrust upon him. Later I sometimes thought he might well ask 'was your journey really necessary?' More especially as I was never able to satisfy his earlier hopes of a speedy and abundant supply of arms for his Chetniks. His frequent requests to me, duly passed on to H.Q. in Cairo, were more often than not met with a reply either that four engined aircraft necessary for the eight hour flight were not available or weather conditions over the Balkans, especially during the Winter months, made flying conditions impossible. For security reasons our respective headquarters were situated in different villages. I therefore only met him by appointment when either he or I had messages or plans to discuss.

The General by now was Commander of all Royalist forces in Yugoslavia, Minister of War in the Government now in exile and had become the focal point for the underground civil administration in Serbia.

Handicapped by lack of a trained military staff, suffering from inadequate means of communications, he appeared to me at all times undismayed and determined to fight on and free his country of all its enemies. I confess I was filled with admiration at the calm way he dealt with his daily problems. I can not have been one of the smallest of these with my requests for positive military action against the Germans.

Unfortunately about now our war aims started to diverge. Ours, a short term policy with requests for action to help in the defeat of the Germans as quickly as was possible. The General on the other hand knew the Allies would win the war, and taking the long term view of the problems, was concerned as to the best way he could conserve his forces in order to be able to win the peace in Yugoslavia.

The Germans, demoniac psychologists that they are, were inflicting fearful retribution on the population in the vicinity of any Chetnik action. As the General's forces were mainly recruited locally and were neither in sufficient strength nor well enough armed to prevent these reprisals, one could appreciate Mihailovich's desire to avoid provocative action leading to reprisals which would seriously discourage his local supporters.

Understandable to us on the spot but unfortunately not war against the Germans as the Allies wished it to be waged.

In the Spring of 1944 I received orders from the C. and C. Middle East to inform General Mihailovich that two named bridges on the German's line of communications were to be destroyed. The General expostulated and demanded arms necessary for these operations be provided. Middle East's reply was 'No bridges destroyed, no arms' to which the General countered 'No arms, no bridges destroyed'. Deadlock ensued. This impasse finally led for the withdrawal of my Mission. It is pleasant now as it was more so then to recall the control Mihailovich had over his forces was such that no retaliatory actions were taken against any of my officers or men scattered throughout Serbia.

This great Patriot was eventually captured by enemies attacking him from all sides. A courageous and loyal servant to his King who gave his all for the Dynasty, and whilst doing so received the unstinted support of his officers and men.

I salute a brave officer of the Royal Yugoslav Army who, faithful to the end in the cause for which he strived, met an undeserved death with unflinching courage.

Posted by Aleksandra at Wednesday, August 02, 2006