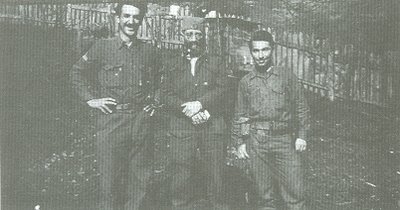 Captain Nick A. Lalich, a WWII American O.S.S. Officer, was instrumental in setting up and successfully carrying through the "Halyard Rescue Operation" (Halyard Mission) in Nazi occupied Yugoslavia in 1944, during which over 500 American airmen along with a couple hundred other Allied airmen were safely evacuated from behind enemy lines and returned to their families and their homes. He was an honored speaker at the 50th Anniversary "Halyard Mission Commemoration" on May 31, 1994 which was part of the weeklong D-Day anniversary celebration in Chicago, Illinois. He described for the audience what it was like to be there during those critical months in 1944, reliving for us his rememberance of the greatest rescue of American lives from behind enemy lines in the history of warfare.

...I would first like to recognize the following people, those who are here, and those who are not, who have been so active in the cause:

I would like to pay tribute and dedicate this presentation to:

Since the "Halyard Mission" is being celebrated here in Chicago, let me name a few American airmen from the Chicago tri-state area who are being honored:


During July of 1946, many of these flyers, and many more across the country, flew to Washington, D.C. hoping to persuade Congress and the U.S. State Department to intervene to save Draza Mihailovich from the communist firing squad. They also generated many media news stories favoring the General.

Before I narrate the rescue of the American airmen, starting with the night evacuation of August 9, 1944, I would like to recognize two very important Americans who contributed greatly to the Halyard Mission:

The late Colonel Nick Stepanovich, U.S. Army from nearby Indiana Harbor. Colonel Nick was the one who recommended and helped recruit our American Serbs in the O.S.S. -- we are grateful and proud.

Major George Vujnovich (Ambridge, PA and New York City) who was the O.S.S. chief in Bari, Italy and responsible for selecting and sending into Yugoslavia the Halyard Mission members to Draza Mihailovich.

Now to narrate to you some excerpts from my diary - the dramatic daylight rescue of the American airmen from enemy-occupied Serbia and Bosnia...

August 9 [1944], after the first night evacuation of 48 injured airmen, including our Major Felman, I reminded Captain George Musulin, our leader of the Halyard Mission, that headquarters, Bari, Italy, was going ahead with the daylight evacuation - this morning, August 10th - today, yes, today - of 240 American airmen, from a make-shift airfield at the mountain plateau of Pranjani, near Ravna Gora, only 60 miles southwest of Belgrade, with the German headquarters for the Balkans in Serbia proper.

Back at our headquarters "Gov" Musulin and I caught a few winks plus a bite to eat -- we went over our plans -- all American airmen were ordered to be at the airstrip no later than 8:00 in the morning. We were expecting to arrive at 8:15 a.m. 6 C-47 air transports with 25 P-51 fighter escorts as coverage. At 9:15 a.m. another group of air transports were to arrive with air coverage.

Gosh, I could hardly wait!

The people in the nearby villages were absolutely tops - to think that each of our 240 airmen were given a comfortable lodging with food by the Serbian people. They had faith in our airmen and in the Halyard Mission -- that's what I call real democracy.

We are ready! The field was as inviting as a billiard table - our Chetnik guard was out 8,000 strong. Suddenly, I heard the Brrr-rr of plane engines -- they were coming - 6 C47s with a fighter cover escort of 25 P-51s. What a sight! My God, it was beautiful! The pilots of the 60th troop carrier command.

The fighters buzzed the vicinity of Gornji Milanovac, Chachak, and other nearby German-occupied areas -- everything seemed okay. I let out a sigh of relief and turned to watch. The people were straining their eyes upward, disbelief on their faces - then cheering and waving. They pounded each other on the back so full of emotion! That here was "the greatest show on earth!" And what a show they put on - our American air force.

Six C-47s landed at 8:45 a.m. Twenty airmen went to each plane. We boarded 120 airmen on the first six planes. Then at 9:15 six more planes arrived. The remaining 120 airmen were boarded and off they went!

At last it was over. 12 planes flew away. Gosh, we sure sweated them out. Some 300 peasants had rushed the field to say 'Good-bye' to the American flyers. Flowers were being strewn all over the airfield - the airmen were throwing out their clothing - jackets, shoes, etc. The people were crying - honestly, by far, the greatest day in my life!

During the months of August and early September, the Halyard Mission continued daylight and night evacuations from Pranjani. The count of American airmen, American civilians, Russians, Italians, French and British evacuated was over 380 at that time.

With Tito's communist Partisans making attacks on Draza Mihailovich's forces, the Halyard Mission moved with Draza over the Suvobor Mountain into Mijonica. We proceeded to Koceljevo in Machva to locate a new airstrip. September 17th two C-47s landed at noon to evacuate 24 airmen and Dr. Carpenter and Dr. Mitrani, his two aides and our naval officer, along with O.S.S. photographer J.B. Allin. It was a successful evacuation.

From Koceljevo, we moved toward Bosnia, crossing the Drina River at Badovinci to Medjaci -- on toward the Trebava mountains, picking up American airmen on the way. There we met Father Sava, leader priest of the Chetnik forces for that area of Bosnia.

We moved south toward Doboj, where we could observe the German garrison from a nearby mountain. We then crossed the Sprechna River, moving to Boljanic where we readied a new airstrip for possible evacuations then headed south toward Sarajevo and on to Okruglice, after crossing the Krivaja River at Stog. Colonel McDowell, of the RANGER Intelligence Mission was recalled back to Bari, Italy. The mission and eight American airmen returned to Boljanic where they were evacuated on November 1, 1944. I was told to continue with the Halyard Mission and stay with Draza -- also told to pick up 16 additional American airmen in Visegrad. Instead, the 16 airmen arrived with an escort in Okruglice with our American citizen Bobby Marijanovich of Alquippa, Pennsylvania.

The Halyard Mission was ordered to evacuate -- we now had 16 airmen all in terrible physical shape. In addition, we had received word that 9 more airmen were holding up at Boljanic, waiting for our arrival.

First, have the nine airmen at Boljanic join us at Okruglice, then move to Bugojno, across the Bosna River, then travel to the Adriatic Sea for a pick-up. Second, turn ourselves, the Halyard Mission with our 25 flyers, over to Tito's Partisans. My answer: "No way!" I insisted that, "since you people sent me in - I want you to come and evacuate us - including all the airmen at Boljanic, our last last airstrip." O.S.S. approved!

Now to recall our last day in Okruglice, Bosnia, with Draza Mihailovich:

Before leaving Draza, I told him that O.S.S. headquarters had gotten permission from our State Department, via George Vujnovich, Chief of Operations in Bari, Italy, to bring Draza out of Yugoslavia.

Draza quoted to me from Georges Danton, the leader of the French Revolution:

"You can't," he said, "carry your country out on the sole of your shoes."

He then told me this:

"I was born here on this this soil. I will stay with my people on this soil, and I will be buried in this soil."

We left Draza Mihailovich on the 11th of December, 1944, with our American flyers, from the village of Okruglice, not too far from Sarajevo. There, in the pre-morning dawn, during a heavy snowfall, Draza Mihailovich assembled two thousand of his Chetniks for a farewell salute to the 16 flyers of the Halyard Mission, who were leaving Draza's Ravna Gora fighters, the first guerrilla forces in Europe.

There, in front of his troops, we kissed Draza 'good-bye' -- yes, the American airmen, Jibby, and I -- Jibby, of course, being the radio operator. Draza presented me with a "Kama" - a two edged Serbian knife and also a Kama for Captain George Vujnovich.

Draza then tore off his Serbian patch, an insignia he had worn for four years, and gave it to me as an uspomena - a souvenir. It said: "Samo Sloga Srbina Spasava" - "Only Unity Saves the Serbs."

I, in turn, gave Draza my American carbine, I told him he never did receive Allied jets and other material to fight this war. I had a deep sadness in my heart. I could hardly talk. In fact, tears rolled down my cheeks. Believe you me, it was a sad situation.

I thanked Draza for returning to America our American airmen and allies. What else could I say but, "Hvala za sve" - Thank you for everything.

We parted, our airmen, Jibby, and I, waving to Draza. The Chetnik rifles saluted long in the morning.

For the trip back to the Boljanic airstrip, Draza gave us 40 Chetniks, led by "Shane", the champion skier of Yugoslavia - he really knew the mountains in the snow and would help carry us over the hardships - and Major Blagojevich as my liaison officer. We slowly took through the Zvezda planina, over to Stog, across the Krivaja River, across the Ozren mountains, stopping for Serbian Orthodox church services at the monastery, and on to Boljanic where our brave American airmen, Jibby, and I, were evacuated on December 27, 1944.

Slava Chici. The glory to Draza.