"I simply cannot believe that a monument to General Mihailovich, built with private moneys on American soil, could be considered an affront to the Government of Yugoslavia. We have delayed too long on this matter and I urge expeditious action by both Houses." 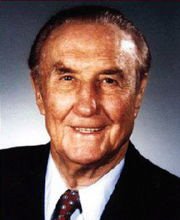 
By Mr. THURMOND (for himself and Mr. DECONCINI):

S.J. RES. 182. Joint Resolution to authorize the National Committee of American Airmen Rescued by General Mihailovich to erect a monument to Gen. Draza Mihailovich in Washington, D.C. or its environs, in recognition of the role he played in saving the lives of more than 500 United States airmen in Yugoslavia during World War II; to the Committee on Energy and Natural Resources.


MR. THURMOND: Mr. President, today, I am introducing a bill which will authorize the National Committee of American Airmen Rescued by General Draza Mihailovich to erect a monument in Washington.

The reason for having such a monument stems back to World War II. During that war the United States and Great Britain initially supported the nationalist resistance movement in Yugoslavia, led by General Draza Mihailovich. Due to a tragic combination of errors and mistaken information, the Allies withdrew their support for Mihailovich at the end of 1943 and backed the Communist resistance movement of Marshal Tito.

Despite his abandonment by the Allies and despite the merciless wear waged against him by both the Communists and the Nazis during 1944, Gen. Draza Mihailovich and his forces, known as the Chetniks, succeeded in rescuing some 500 American airmen who were shot down over Yugoslavia. Most of these men were safely evacuated from Nazi-occupied Yugoslavia to Italy.

In 1948, President Harry S. Truman awarded posthumously the Legion of Merit to General Mihailovich for his heroics in rescuing American airmen and for his larger services to the Allied cause. Unfortunately, the American public was unaware of this award since the State Department, fearful of offending the sensibilities of the Yugoslavian Communist Government, made the award to Mihailovich “secret” for almost 20 years.

Since that time, a group of American airmen have organized themselves into a national committee composed of American airmen rescued by General Mihailovich. This fine organization has launched a movement to build a memorial in Washington, D.C. dedicated to the man who saved their lives. This effort has been ongoing for some time now, with the support of many Members of Congress. I can think of no better way to discharge this debt than to authorize these airmen to erect the monument they have in mind.

Mr. President, in voicing my support for this effort, I want to emphasize the fact that this project is to be financed, not by the American taxpayer, but through the fundraising efforts of the airmen’s group. All costs for the construction and maintenance of this memorial will be borne by the private sector.

This legislation is virtually identical to previous measures that have been approved overwhelmingly in the Senate.

Mr. President, the airmen who seek authority to have this monument erected do not wish to make political noises that would offend the present Government of Yugoslavia. They seek only to acknowledge their deep sense of gratitude to a man who was instrumental in rescuing nearly 500 downed American flyers during World War II. They merely want the simple recognition that would be imparted by the erection of the General Mihailovich monument.

Mr. President, I ask unanimous consent that the text of the resolution be printed in the RECORD.

There being no objection, the joint resolution was ordered to be printed in the RECORD, as follows:


Resolved by the Senate and House of Representatives of the United States of America in Congress assembled, That subject to authorization by the Secretary of Interior pursuant to section 2 and the provisions of Public Law 99-652, the National Committee of American Airmen Rescued by General Mihailovich is authorized to establish a monument on public grounds in the District of Columbia or its environs, to honor General Draza Mihailovich for the role he played in saving the lives of more than five hundred United States airmen in Yugoslavia during World War II.

Sec. 2. (a) The Secretary of the Interior, in consultation with the National Committee of American Airmen Rescued by General Mihailovich, shall select with the approval of the Commission of Fine Arts and the National Planning Commission a suitable site on grounds owned by the Federal Government in the District of Columbia or its environs for erection of the monument referred to in the first section of this joint resolution.

(c) Neither the United States nor the District of Columbia shall bear any expense in the erection of the monument other than expenses incurred in the process of site selection and approval of design and plans.

Sec. 3. The Secretary of the Interior shall permit ground breaking for construction of the monument only after he determines that sufficient funds are available to complete the monument in accordance with the approved design and plans.

Sec. 5. The maintenance and care of the monument erected under this joint resolution shall be the responsibility of the National Committee of American Airmen Rescued by General Mihailovich.

Mr. DeCONCINI. Mr. President, I am pleased to cosponsor Senator Thurmond’s legislation to authorize the National Committee of American Airmen Rescued by General Mihailovich to erect a monument to General Draza Mihailovich in Washington, D.C. This is subject to authorization by the Secretary of the Interior or pursuant to section 2 and the provisions of Public Law 99-652.

As many of us are aware, General Mihailovich is responsible for saving the lives of over 500 American flyers who were shot or forced down over Yugoslavia during World War II. For his acts of heroism and bravery at that time, he made the ultimate sacrifice, his life, during the internecine strife which plagued his country following the war.

Today we are here to again remember his heroic efforts during the war on behalf of American flyers. Introduced last year under the sponsorship and direction of Senator Thurmond, this legislation expressed the support of the Senate for this worthy cause. We are reintroducing this resolution today to again commemorate the memory of General Mihailovich. Just as we have recognized the valiant acts of the Marquis de Lafayette and General Casimir Pulaski, so it is fitting that we do so for this courageous man to whom so many Americans still living owe their lives.

One of those men is Richard L. Felman of Tuscon, Arizona who has devoted his life to seeking recognition of General Mihailovich’s efforts to save the lives of American servicemen. I congratulate Major Felman for his diligence and devotion, and admire the dedication to this cause which he has displayed since the end of the war. For nearly a half of a century, Major Felman has crusaded for proper recognition of General Mihailovich, a crusade which merits a successful conclusion.

Mr. President, this legislation has been successfully passed in the Senate numerous times in the past, only to be stalled in the House, due in large measure to objections raised by the State Department. I have worked with Senator Thurmond and with Members of the House to attempt to solve this dilemma. I am hopeful that with a combined effort from both Chambers and the Department of the Interior that this logjam can be broken up and an appropriate monument erected. I simply cannot believe that a monument to General Mihailovich, built with private moneys on American soil, could be considered an affront to the Government of Yugoslavia. We have delayed too long on this matter and I urge expeditious action by both Houses.

Posted by Aleksandra at Saturday, October 28, 2006