Tito was no Liberator and Draza Mihailovich was no Collaborator 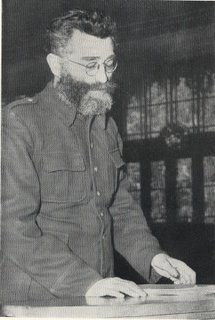 General Mihailovich at his Trial in Belgrade
before the Yugoslav communist court that
would execute him immediately following the
completion of the Trial in July of 1946.

EXCERPTS FROM A SPEECH GIVEN BY

On the issue of Alleged Collaboration with the Germans

“Wasn’t it in the Spring of 1943 (March to be exact) that Partisan representatives me with the Germans and confirmed that the Chetniks were their main enemy—that they would be willing to forego operations against the Germans in order to fight the Nationalists, and would, if necessary, even oppose Allied landings in Yugoslavia? It was also in March, 1943, that Gen. Rudolf Luters, a German field commander in Yugoslavia, stated:

‘The Chetniks were never our friends…their aim is and remains our destruction.’


…Critics of the Nationalist movement claim that for months General Mihailovich encouraged a live-and-let-live arrangement with the Germans in order to fight the Partisans. Nationalist claims that the Partisans were later doing the same thing were largely dismissed. According to Col. McDowell:


‘The Partisan Army made no serious effort to fight Germans or hinder their retreat, but concentrated on attacking Nationalist troops who in some instances were occupied in attacking Germans.’


Once again, reports from OSS officers with the Partisans confirm the intelligence from Nationalist [Mihailovich] sources:

Don Rider [ASH] in the Vojvodina accompanied Partisan columns which on several occasions passed within one hundred yards of German bunkers with neither side firing a shot.

Major Scott Dickinson [SPIKE] (Macedonia) ‘From the extent of the German movements it was clear that the Partisans were permitting them to get out and were occupying towns and villages as soon after the Germans left as possible.’

Rex Deane [REDWOOD] (Montenegro) The Partisans ‘seemed content to keep out of the Germans’ way and let them get out of the country. No concerted effort was made to stop them or ambush them in any way.’ In Deane’s opinion the Partisans were far more interested in attacking the Chetniks and their supporters than in fighting the Germans. One British commander in the Dubrovnik area because so frustrated with the Partisans that he charged ‘they all should be court-martialed for letting the Germans escape.’

These examples, and others could be cited, confirm precisely the intelligence contained in the reports of McDowell, Ellsworth Kramer, and John Milodragovich—all members of the RANGER Mission with Mihailovich.


Not only were the Partisans allowing the Germans to get out of the country, they were using the bulk of supplies being sent to them by the Allies to fight the Nationalists (Chetniks). In fact, they were receiving so much in the way of supply until they were actually having to store the excess. This fact is confirmed in the reports of Dan Desich, Stephen Galembush, Holt Green, and Rex Deane—all of whom were attached to Partisan units. So much for the Partisan effort to present themselves as the victims of some treacherous collaboration between the Nationalists and the Germans.

Walter Mansfield addressed the collaboration issue very succinctly when he argued that if both major resistance movements were judged by the same standards, one would have to conclude that both movements collaborated, or that neither did so.

…The effort to label General Mihailovich as a collaborator will fail, I would say has failed, because the evidence does not sustain that conclusion. General Mihailovich chose to resist the Germans and Italians at a time when there was absolutely no help available to him from any source. Throughout the war he and his men endured an existence which defies imagination. Walter Mansfield reported that Mihailovich’s forces ‘live under conditions which I would have considered it impossible for them to stand if I had not seen it with my own eyes.’ During one battle, Mansfield saw men with chest and stomach wounds, who when they were unable to find medical attention in the rear lines, simply returned to the front and continued to fight until they died. The wretched condition of Mihailovich’s units led David Martin to write that ‘surely no group of men “collaborated” with the Germans for so poor a return.’

If Draza Mihailovich had been a collaborator, hundreds of American airmen, some of whom may be in the audience this evening, would never again have set foot on American soil. Nationalist troops put their lives on the line and in some cases lost their lives saving American airmen from capture. They later gave what little they had in the way of medical supplies to treat those airmen who were wounded or sick. And with hardly any equipment at all, they provided protection for the airmen who were evacuated at Pranjani. Listen to what Colonel Robert McDowell wrote when he saw the condition of the Nationalist troops guarding the airstrip:

‘To complete our shame, although the American
medical personnel were appalled at the almost
complete lack of medical supplies and equipment
available to the Nationalists, with major operations
performed without anesthetics, and although the
Nationalists gave the Americans the best of what
we had, the only gesture of gratitude on our part
was to replace supplies expended upon the airmen
at the actual point of embarkation.’


(I would note parenthetically that the supplies which were finally sent were sent largely because of the insistence of George Musulin, Nick Lalich, George Vujnovich—operations officer in Bari.)

Then, to make matters worse, McDowell reported that night after night he and members of his team sat around their campfires and heard Allied planes flying overhead to drop supplies to the Partisan—supplies they knew would be used against the Nationalists. Walter Carpenter, a 15th Air Force medical officer sent to Mihailovich’s headquarters to tend the needs of American airmen confirmed this when he later reported:

‘Here we see American weapons and bullets being
furnished by the British daily to kill the enemies of
Germany.’

History has a way of being charitable to winners, particularly when the winners write it. For almost three decades after the Second World War, the history of Allied policy toward Yugoslavia was written by many of the same individuals who shaped policy there in the first place. In short, they were evaluating their own handiwork—a sort of ex-post-facto justification for wartime decisions. In the absence of documentary evidence to the contrary these firsthand accounts were generally accepted as the truth of what had occurred in Yugoslavia. David Martin’s Ally Betrayed was a notable exception, as was Col. Albert Seitz’s Mihailovich: Hoax or Hero. Today, greater revelations from the historical record require that substantial revisions must be made in any credible examination of Yugoslav resistance history and of Allied policy toward the resistance.

Tito was no liberator, nor was Mihailovich a collaborator. The major Allies, particularly Britain, supported Tito and abandoned Mihailovich because they thought it was in their interests to do so. It was the expedient thing to do. Not wishing to justify their policy on the grounds of expediency, however, they sought to discredit Mihailovich by suggesting that he was not fighting the Axis occupation forces or was collaborating with them. After all, it was much easier to defend the abandonment of a “collaborator” than to defend the abandonment of a loyal ally.”


Dr. Kirk Ford, Jr. is the Chairman of the Department of History and Political Science at Mississippi College in Clinton, Mississippi. He is the author of the book OSS and the Yugoslav Resistance 1943-1945, published by Texas A&M University Press, 1992.

This book is an extensively researched, in-depth, objective and truthful analysis of OSS activity attached to both the Mihailovich forces and the Partisan forces under Marshall Tito. Highly recommended for any honest pursuit of research interests in the area of World War Two Yugoslavia and the role played by the United States in relation to the Yugoslav resistance movement against the Axis forces.