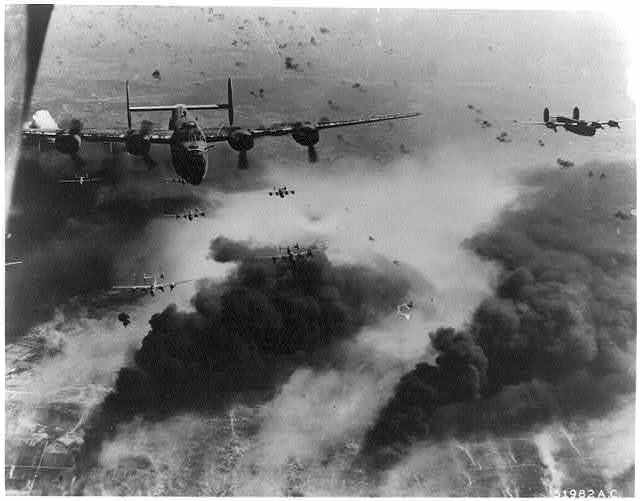 Waves of Consolidated B-24 Liberators flying over the Concordia Vega oil refinery after dropping their bomb loads on the oil cracking plant, Ploesti, Rumania, 31 May 1944. Photo courtesy of www.local.gov [The Library of Congress] 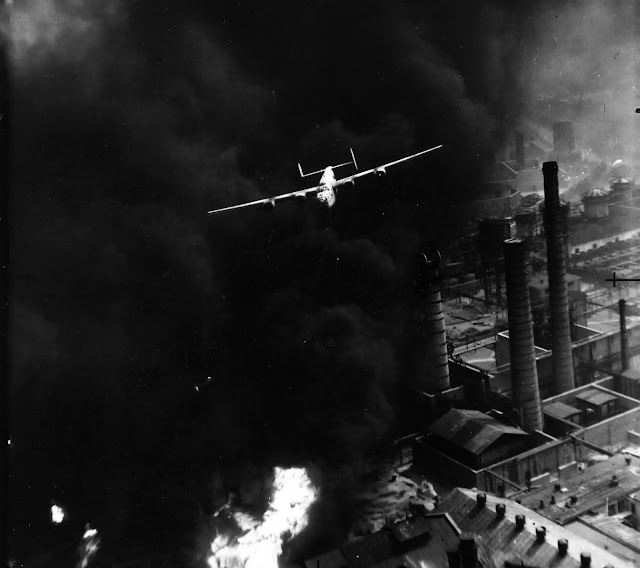 One of the most famous images of World War II shows The Sandman [a B-24 Liberator], piloted by Robert Sternfels, as it emerges from a pall of smoke during the TIDALWAVE mission August 1943. Photo courtesy of ww2today.com

Aleksandra's Note: Essential to the story of the great WWII Halyard Mission Rescue Operation of 1944 is the significance of "PLOESTI" in Romania. The American and Allied Airmen who were sent on the bombing missions to take out Hitler's primary supply of oil in 1943 and 1944 were among the bravest men in the military forces. High up the sky with the enemy down below meant that at any moment the planes could be shot down and the airmen in those planes along with them. Where they would end up falling, if they survived at all, would be critical to their survival and their future.

Fortunately for hundreds of these brave men, they ended up landing on Nazi occupied territory that happened to be filled with the Chetnik forces of Serbian General Draza Mihailovich and the Serbian people loyal to them.

"Remembering Ploesti", an article published in National Review in August of 2013, provides the context in which one of the greatest and most heroic stories of World War Two happened.


Remembering Ploesti
It underscores the importance of liberating America’s potential to produce transportation fuels.
This week [August, 2013] marks the 70th anniversary of the U.S. Army Air Corps raid on Ploesti, Romania, one of the most heroic episodes in the history of military aviation.