Instead of just commemorating the Holocaust with public gestures, the Croatian Catholic Church should show its commitment to truth by stopping churches from hosting events at which the WWII fascist Ustasha movement’s crimes are downplayed. 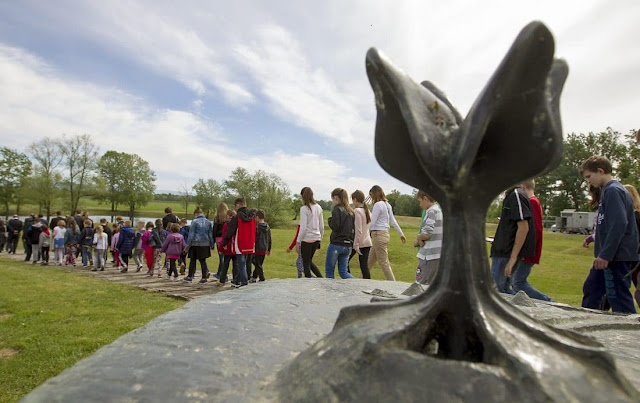 The monument at the former Jasenovac concentration camp during an official Croatian government commemoration in 2016. Photo: EPA/ANTONIO BAT.

Scene 1: A 50-metre-high banner bearing the words “Holocaust Victims Remembrance Day” in both Croatian and Hebrew hangs from the tower of Zagreb’s Catholic Cathedral, a well-known city landmark.

At a grand state ceremony on January 24, Zagreb Archbishop Josip Bozanic unveiled the banner to mark International Holocaust Remembrance Day, the day when on January 27, 1945 the Soviet Red Army reached the Auschwitz death camp. The Catholic Church paid for the banner to be made itself.

Paying respects to the Jewish victims of World War II, Bozanic read a psalm in Hebrew and said that everyone must remember “the great suffering of the Croatian Jewish community”, noting how the Jewish population of Zagreb plummeted from 11,000 to 2,000 people.

While mentioning the killing of six million Jews during the Holocaust across Europe, he emphasised that we “must give special attention” to the fact that part of it took place in Croatia. Besides the Nazi camps, he said we must “highlight the truth about the horrors of Jasenovac” – the biggest WWII concentration camp in Croatia, where Jews were killed.

The event was labelled ‘unprecedented’ by media and some members of the Croatian Jewish community, and was praised by politicians and the Simon Wiesenthal Centre, a prominent Jewish human rights organisation.

Scene 2: A middle-aged man going by the name of Roman Leljak presents a book and film named ‘The Myth of Jasenovac’ at the Saint Ante Padovan Church in the Croatian coastal town of Sibenik.

At the promotional event on February 9, Leljak explained how he wants to tell “the final truth” about the camp, which he argued was not ruthless as it has been described.

He also insisted that the wartime Nazi-allied Independent State of Croatia, the NDH, which ran the camp, “gave the Jews a chance to survive”.

During his presentation, a priest exclaimed emotionally: “You are a divine providence! Where do you find inspiration for such courage for all you do?” 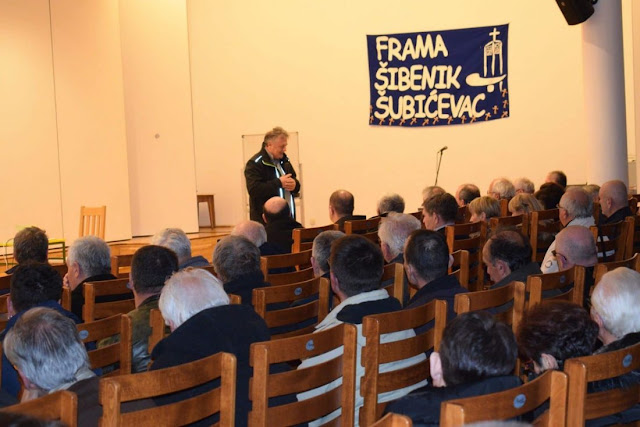 Roman Leljak presenting his book and film in a church in Sibenik. Photo courtesy of Marko Podrug.
If you had fallen from the Moon and witnessed both events, you would have got a strange impression of what happened during the Holocaust in Croatia, and what the Croatian Catholic Church thought about it today.
You might think that the Croatian Catholic Church was bravely deconstructing myths, searching for the truth and empathising with Jewish suffering as it mourned the six million Jews killed in Nazi camps far away.
You might also think that Nazi Germany established a concentration camp in Jasenovac, but be reassured that the NDH “gave the Jews the chance to survive”.
This would make a nice bedtime story if it wasn’t an outright lie. Jasenovac was not founded by Nazi Germany, but by the domestic fascist Ustasa movement, which modelled its puppet state upon Germany, persecuting Serbs, Jews and Roma on ethnic and religious grounds.
In reality, NDH didn’t give Jews a chance to survive – that is why over 30,000 of around 40,000 Jews who were living in its territory were killed. At Jasenovac, the Ustasha murdered 13,116 Jews, along with 47,627 Serbs, 16,173 Roma and 6,229 victims from other nationalities, whose names we know. [*]
In the world of historical research, these are the facts and not what Leljak – a self-proclaimed researcher, a former convict and local politician – claims they are.
Although the Croatian Church has commemorated the victims of the Holocaust for the first time, receiving a lot of praise for doing so, it was done, almost as always, dishonestly.
Claiming you respect Jewish suffering during the Holocaust on January 24, only so you can promote a book on February 9 that claims that this same NDH “gave them a chance to survive”, is nothing less than hypocrisy.
It was even a greater hypocrisy when another church, this time in Zagreb, allowed the holding of a publicity event for a book called ‘The Jasenovac Lie Revealed’ on January 17. At the event, the authors, Josip Pecaric and priest Stjepan Razum – who claims there were no gas chambers in Auschwitz – said that Croats were the biggest victims of Jasenovac and that the official figure of 83,145 [*] deaths is a lie.
The list of similar promotions and panels trampling on historically established facts about Jasenovac that have been held under Church auspices goes on and on, dating back years.
Therefore, Archbishop Bozanic’s ‘unprecedented’ gesture was nothing less than a publicity stunt, a PR move in which the Holocaust remembrance banner occupied almost the same space on Zagreb Cathedral’s tower that was given over to an advertisement for a Croatian insurance company a few years ago.

The Church providing free advertising space for Holocaust remembrance won’t change the fact that it also provides a rent-free office to an obscure NGO called Project Velebit, another platform for far-right history revisionists. The office is only a few dozen metres away from the cathedral.

Archbishop Bozanic’s speech also omitted any mention of the Ustasha and NDH, which helped cause “the great suffering of the Croatian Jewish community” and ran the deadliest camp outside direct German control.

While some may be impressed by the six million killed Jews that the Croatian cleric mentioned, this is actually a typical case of Holocaust universalisation.

As the highest representative of the Croatian Church, Bozanic should have mention the number killed by the Ustasa at Jasenovac, or said how many perished on NDH-controlled territory, and not hidden behind the enormous figure of 6,000,000.

This is already a known tactic of nationalists from the Baltic to the Balkans – only speaking about the overall six million, as if the Holocaust happened somewhere else, and was implemented exclusively by Nazi Germany.

Furthermore, if Bozanic really wanted to commemorate International Holocaust Remembrance Day properly, he should have mentioned the Serbs and Roma killed by the Ustasa as well.

After all, when the UN General Assembly declared January 27 as a remembrance day, it asserted that the Holocaust included the murder of “countless members of other minorities” – in Croatia’s case, Serbs and Roma.

Acknowledging Jewish suffering in WWII is nothing new for Croatia’s right (or Europe’s). However, while Croatian President Kolinda Grabar Kitarovic fell to her knees at the Yad Vashem remembrance centre in Jerusalem, she has avoided attending the annual commemoration at Jasenovac.

Hiding behind the six million figure and stressing how Ustasha were pressured by the Germans to persecute Jews won’t help the Church exonerate itself.

Avoiding admitting the large-scale murders of Serbs – and therefore playing into Serb nationalists’ hands as they try to portray Croats as genocidal – won’t help the Croatian Church in its campaign for canonisation of WWII Archbishop Alojzije Stepinac. Despite the Jews that Stepinac saved.

By insisting on mentioning only the crimes committed by Serbs against Croats, the Church is not doing anything to change the nationalist narrative in Croatia either.

Avoiding even mentioning that among the victims were the Roma – who are often neglected by everyone, left and right – the Church also participates in another historical injustice against people who have been consigned to the margins of society.

And by failing to appropriately commemorate the victims of the Ustasha regime, at the annual Jasenovac commemoration and elsewhere, the Church meanwhile simply strengthens accusations that it is a bastion of Croatian historical revisionism and Ustasha nostalgia.

And no 50-metre banner will hide that.


Sven Milekic is a PhD candidate at Maynooth University, funded by the Irish Research Council under the Government of Ireland Postgraduate Programme.

[*] Valid estimates of the number of victims killed in Jasenovac by the Croatian Ustasha are far higher than the "83,000" mentioned here! It is estimated that between 700,000 and one million Serbian Orthodox, Jewish, and Gypsy victims were murdered by the Croatian Nazis (Ustashe) during World War Two and the existence of the NDH, the first "Independent State of Croatia".
Aleksandra Rebic