Croatian anti-fascist groups and leaders of Croatia’s Serb, Roma and Jewish communities held their own commemoration of victims of the World War II concentration camp at Jasenovac, ahead of the official event due on April 14 [2019]. 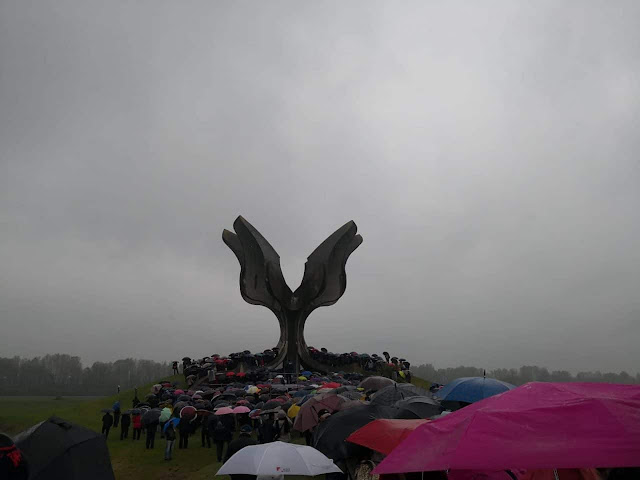 Despite rain, about 2,000 people gathered on Friday for the annual commemoration of the victims of the camp at Jasenovac, site of an infamous World War II concentration camp run by the wartime Croatian fascist Ustase regime.

They gathered first at the Jasenovac Memorial Museum, and then the column passed earthen columns that symbolize the tombs of the dead and the camp buildings.

Representatives of anti-fascist groups and Croatia’s Serb, Roma and Jewish communities delivered speeches in the shadow of the huge monument to the victims of the camp, called the “Stone Flower” for its shape.

“While the Ustasa salute is not removed from public use, there will be no common commemoration at the Jasenovac memorial area,” Croatian Jewish community leader Ognjen Kraus said, describing the camp as “the darkest place of Croatian history”.

After that followed choral singing, a reading testimonies of prisoners and a short commemoration by religious communities.

A name-by-name list compiled by the Jasenovac Memorial Site said the Ustasa regime killed 83,145 Serbs, Jews, Roma and anti-fascists in the camp between August 1941 and April 1945.[*]

The annual commemorations have been organised at the former camp to mark the last attempted breakout by inmates on April 22, 1945, before the Ustasa liquidated the camp and the regime fell.

For the fourth year, representatives of Croatia’s Jewish and Serbian communities, as well as anti-fascists, will boycott the official commemoration of the victims of the camp on April 14.

In March, Prime Minister Andrej Plenkovic invited Croatia’s Alliance of Anti-Fascist Fighters, the Jewish community, Serbs and Roma to commemorate the victims together with state officials.

But Kraus told media in March that “nothing has changed in a year, nothing new has happened” to justify joining the state-backed commemoration.

Anti-fascist groups, Jews and Croatian Serb leaders insist that the state has not taken real measures to stop or even diminish revisionist denials of the Holocaust and genocide in the Second World War.

Roma ethnic minority MP Veljko Kajtazi said in March that he would prefer a joint commemoration for the victims and would attend both events, “although the Roma commemorate our Jasenovac camp victims [at a separate commemoration] every year on August 2”.

The Ustase governed a satellite Nazi-allied state in Croatia known as the Independent State of Croatia, NDH, from 1941 to 1945. Never in full control of its territory, which included Bosnia, it embarked on a campaign of mass killings targeting Jews, Serbs and leftists before succumbing to the Communist-led Partisan movement led by Josip Tito, which took full control over the whole of Yugoslavia in 1945.

[*] Valid estimates of the number of victims killed in Jasenovac by the Croatian Ustasha are far higher than the "83,145" mentioned here! It is estimated that between 700,000 and one million Serbian Orthodox, Jewish, and Gypsy victims were murdered by the Croatian Nazis (Ustashe) during World War Two and the existence of the NDH, the first "Independent State of Croatia".