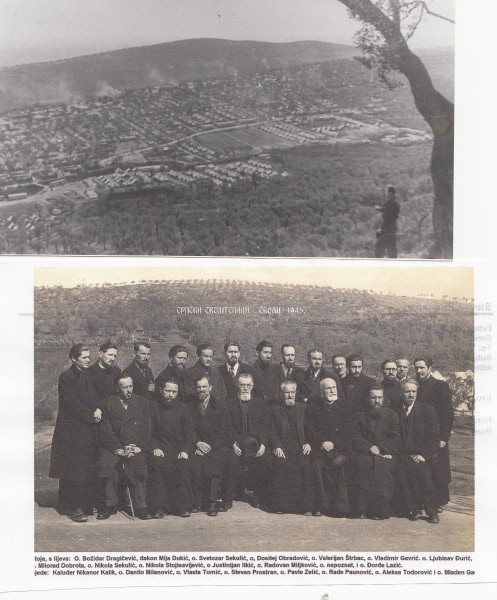 I think there is not enough information available about the period regarding the Yugoslav military-civilian camp located in the small, historical town of Eboli in southern Italy. Probably close to 30,000 people were living there and that camp became a town under the olive trees.
In October of 1945 all of the Yugoslav monarchists, the Chetniks of Vojvoda Djujic and Jevdjevic, the Serbian Volunteers, Slovenian Domobranci and some Croats who escaped in May 1945 and were then in different camps in northern Italy were transferred to Eboli. The camp was a large complex of tents and big huts, made of corrugated metal, and there life became more normal. The camp was run by Serbs and the presence of the British was negligent, so to speak .The families were in a separate part and there were quite a large number of children.
The hospital of the Serbian Volunteers which then enlarged with the doctors and medical help from the Chetniks, got a new name: Chetnik Hospital. The hospital got a number of metal huts and for that time and circumstances, it was well equipped and even had a decent operating room. The nurses, or, as we called them, ‘sisters’, were the same as were in the Volunteers Hospital, with additions of sisters from the Chetniks and Slovenian Domobraci. For TB patients there was a Sanatorium. In January of 1947 the hospital was transferred to a much nicer place, in a resort town, Mercatello, near Salerno. There was a chapel, where the writer of this was married in February of 1947.
Rapidly life improved dramatically.  In a few of the really big metal huts there was a Church where many marriages took place, and where funerals were performed.  A really important part of improving the quality of life was organizing a theater. The actors were talented men and girls, members of the Volunteers, who once a week gave performances, usually some comedy, written by the well known writer Branislav Nusic, or something similar.
No less important was organizing a High School and Commercial Academy, for those, who being in the Army did not finish their schooling. , For seminarian students a Theological-seminary was offered in the camp and there were enough High School professors and many priests qualified to teach in the  High School  and seminary. The Seminary got the name Manasija and the Very Reverend Dr. Rada Paunovic became the Director of the school.  Close to 50 priests were professors. Anglican Bishop Dr. X. Bakston, who came to visit the Seminary was so impressed that he made it possible for a number of the students to get scholarships in England, France and Switzerland.  After finishing some came to the USA, some stayed in England and became parish priests, and a few did very well and were later known for their good service. We should not forget that a course for choir singing was also offered  in one of the largest metal huts which as I said  became a Church.  The cemetery was in a nearby town, Batipaglia, where about 50 were buried. Much later, the remains were taken to a place in Bari on the Adriatic coast.  Ratibor Djurdjevic, who became a member of YMCA while studying in England  succeeded in obtaining  help from that organization, but more important, he and Major Momcilo Djordjevic, after long and difficult work, did publish a Serb- English dictionary.
Volunteers were able to publish a series of books, with the name “Under the Olive Trees – Ispod Maslina”,  where the work of the young writers were published. A number of publications like magazines, some comical and some more serious were printed.
Aside  from schooling, numerous courses for different trades and surveyors offered the chance for many to get educations and be ready for the new life.
A few soccer teams competed to see who is best, and the rivalries were enormous!
A picture of the camp is included, but keep in mind that this is not picture of the whole camp.  Visible also is the smoke, and this came from the kitchens preparing the meals. Included is a very nice picture of all of the priests, who were either from Dinara Division or the Serb Volunteers. As far as I know, none of them is still with us!
Camp was closed in May of 1947, and everybody including the hospital, were sent to Germany, where after some time they all became Displaced persons (DP’s), and put in DP Camps.
Stevan Pirocanac
*****
If you would like to get in touch with me, Aleksandra, please feel free to contact me at ravnagora@hotmail.com
*****

Posted by Aleksandra at Thursday, September 24, 2015