The American Airman and the Serbian Chetnik / Halyard Mission veteran Lt. Col. Milton Friend and Chetnik Nick ("Beli") Mihajlovich meet for the first time 70 years after history was made in Serbia! 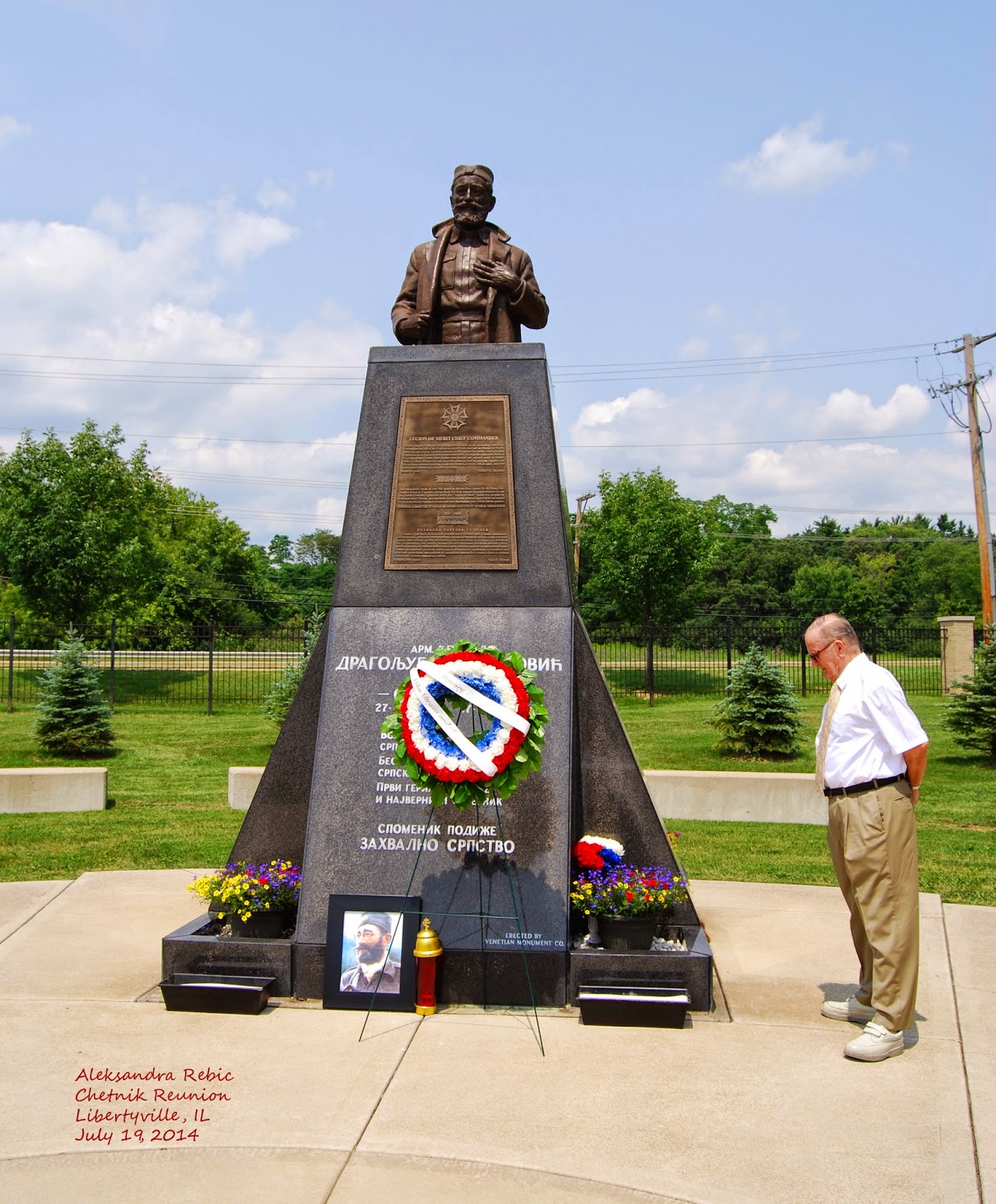 Aleksandra's Note: One of the great highlights of the Chetnik Family Reunion at St. Sava Monastery in Libertyville, IL on July 19, 2014 was the opportunity to meet Mr. Nick ("Beli") Mihajlovich. Thanks to his daughter Danica, who was also present, the two of us met for the first time and I learned that Nick was seeking to meet the living Halyard Mission veterans so that he could share his personal story of having lived through those historic days in 1944 in WWII Yugoslavia as a young boy.

Through subsequent correspondence with Nick's other daughter, Judy Mihajlovich, we were able to facilitate a meeting with Halyard Mission WWII veteran Lt. Col. Milton Friend of the USAF. Just one month after my learning of Nick's quest, he was becoming acquainted and sharing his story with Lt. Col. Friend in person, and it turned out to be an incredible, meaningful day for both of them and their loved ones.

What follows is a unique Halyard Mission true story that I hope you will enjoy. The first is Judy Mihajlovich's description of the August 2014 day she will never forget and the second is Nick Mihajlovich's story. Many thanks to Judy for sharing this wonderful testimony with us.

Shortly after the day they spent together, Lt. Col. Friend shared with me how pleased and grateful he was for the unique opportunity to meet one of the Serbians he values so much and how much he enjoyed the day.

God bless the veterans, both American and Serbian, who kept their vivid memories alive all these years and for sharing them with all of us so that we may carry their legacy on. And thank you to them for never forgetting what General Mihailovich and his Chetniks did for the Allies in the hard days of 1944. 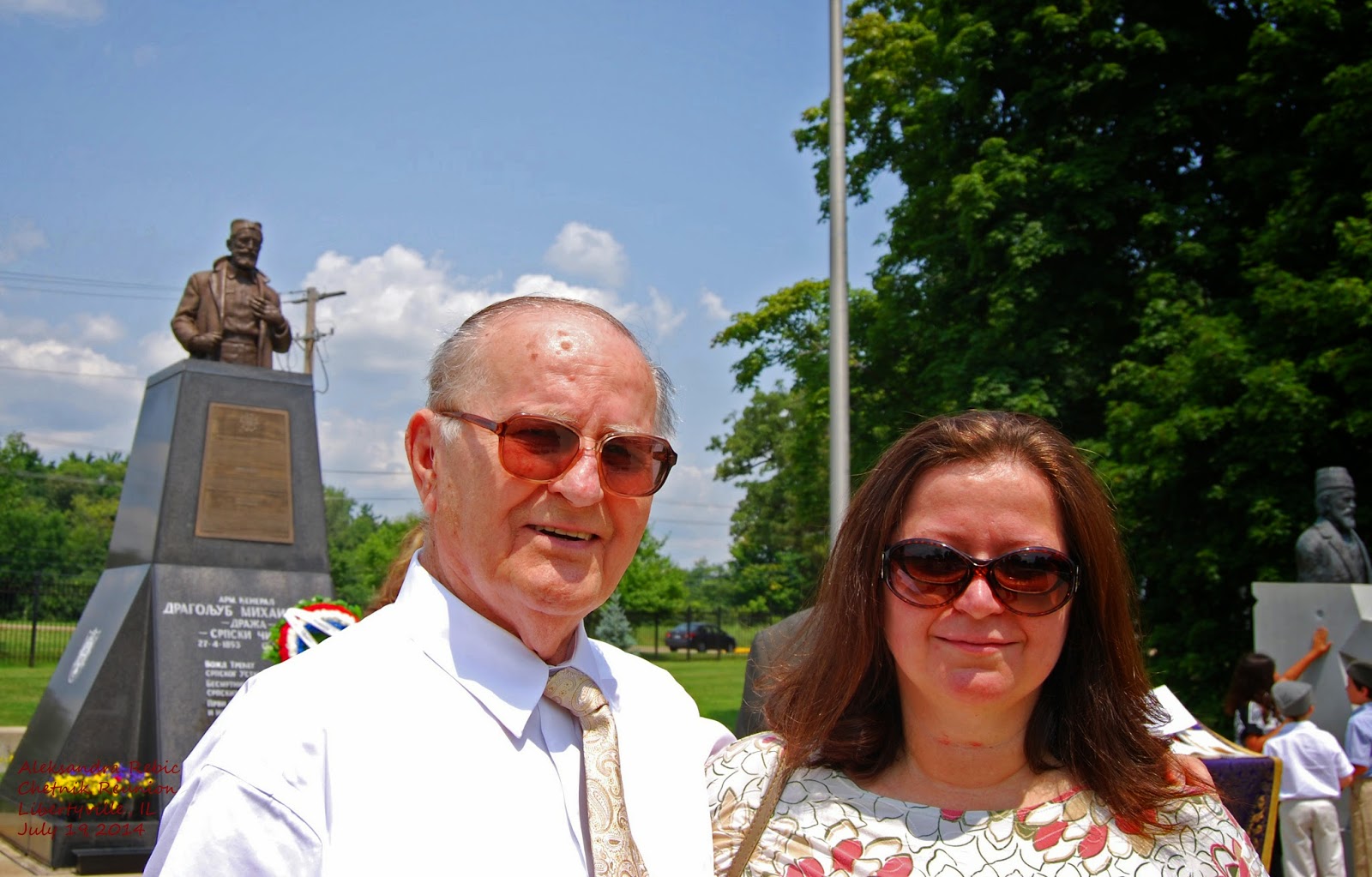 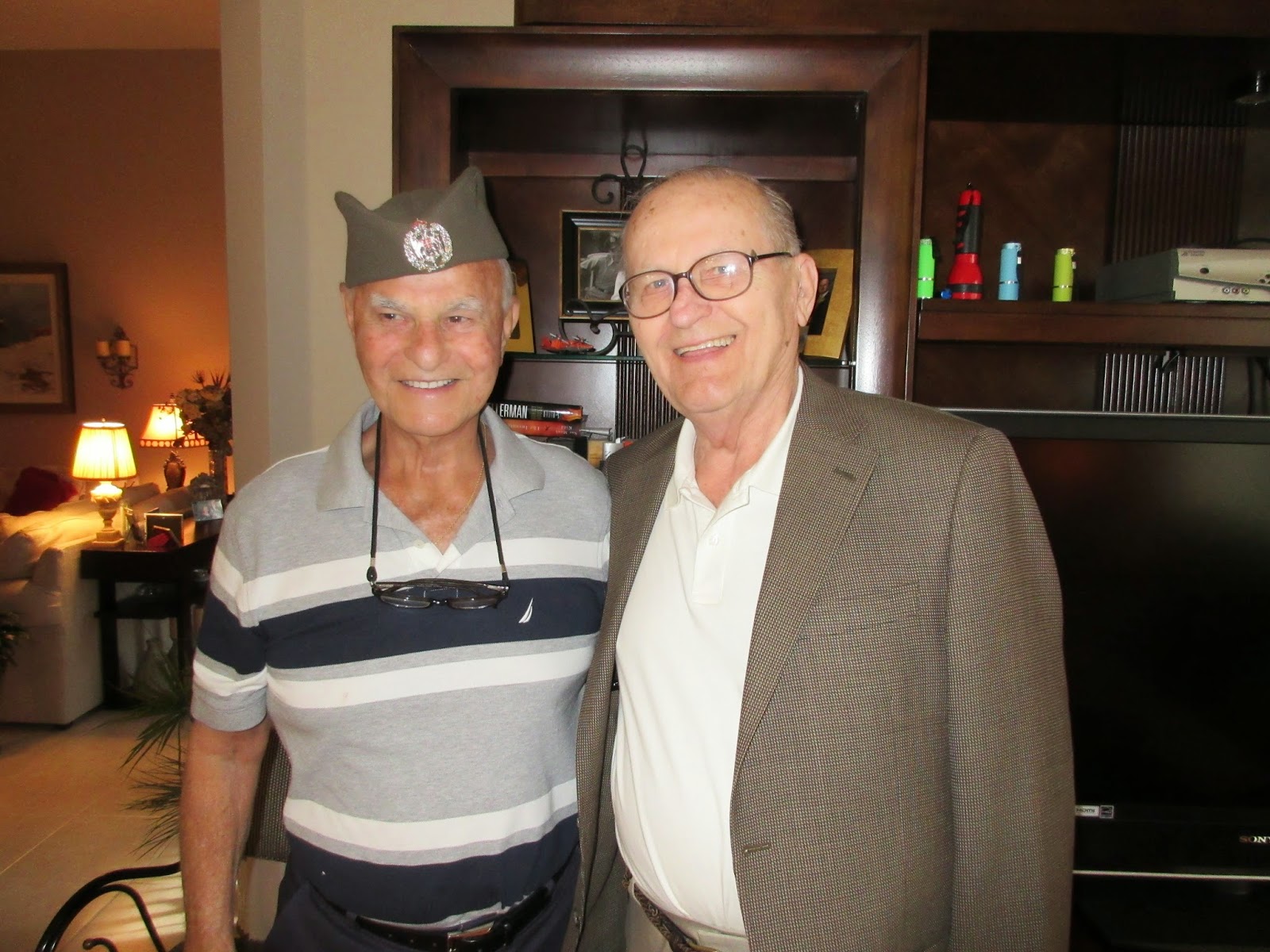 "An American Airman and a Chetnik"
By Judy Mihajlovich
August 2014 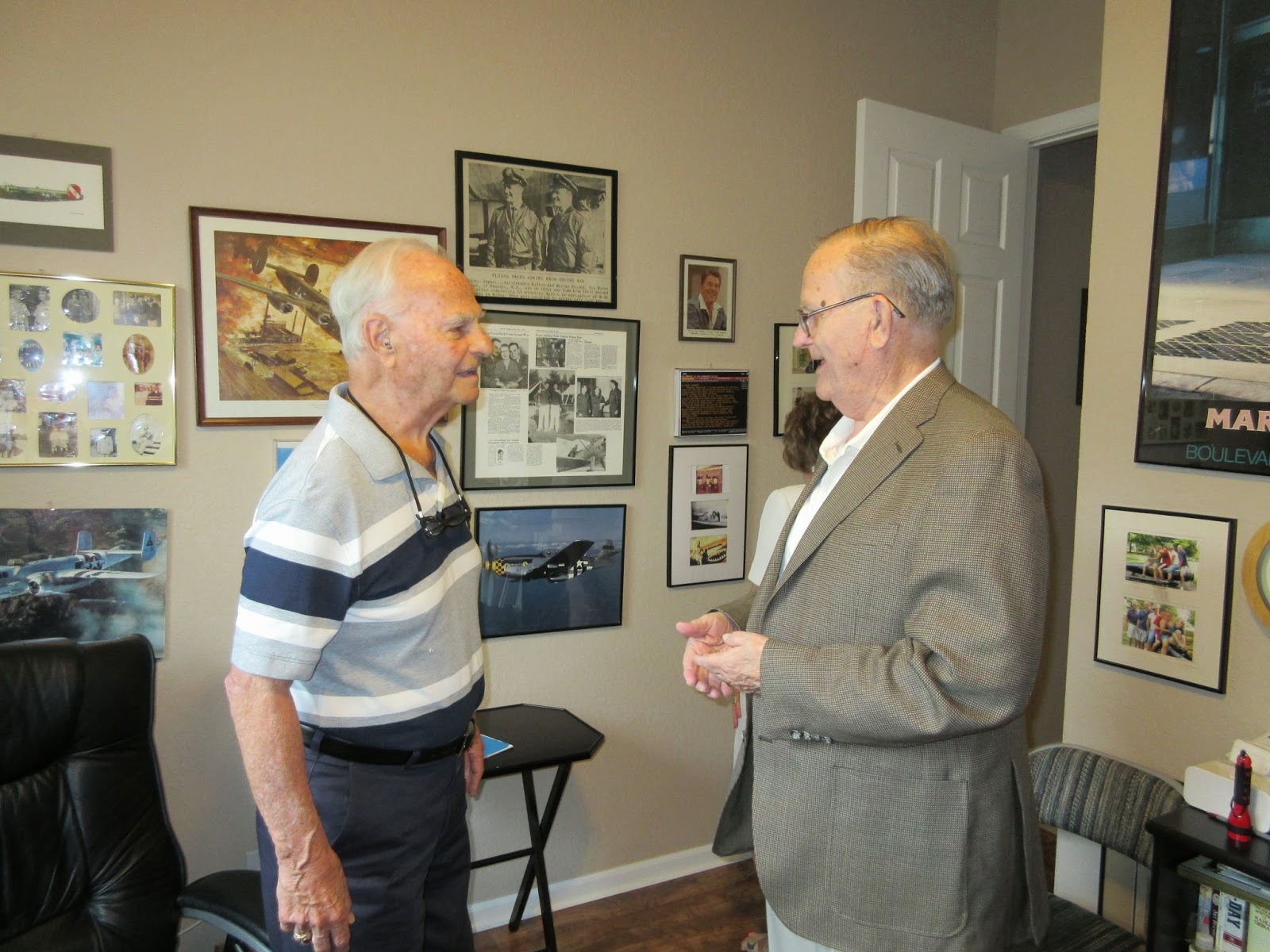 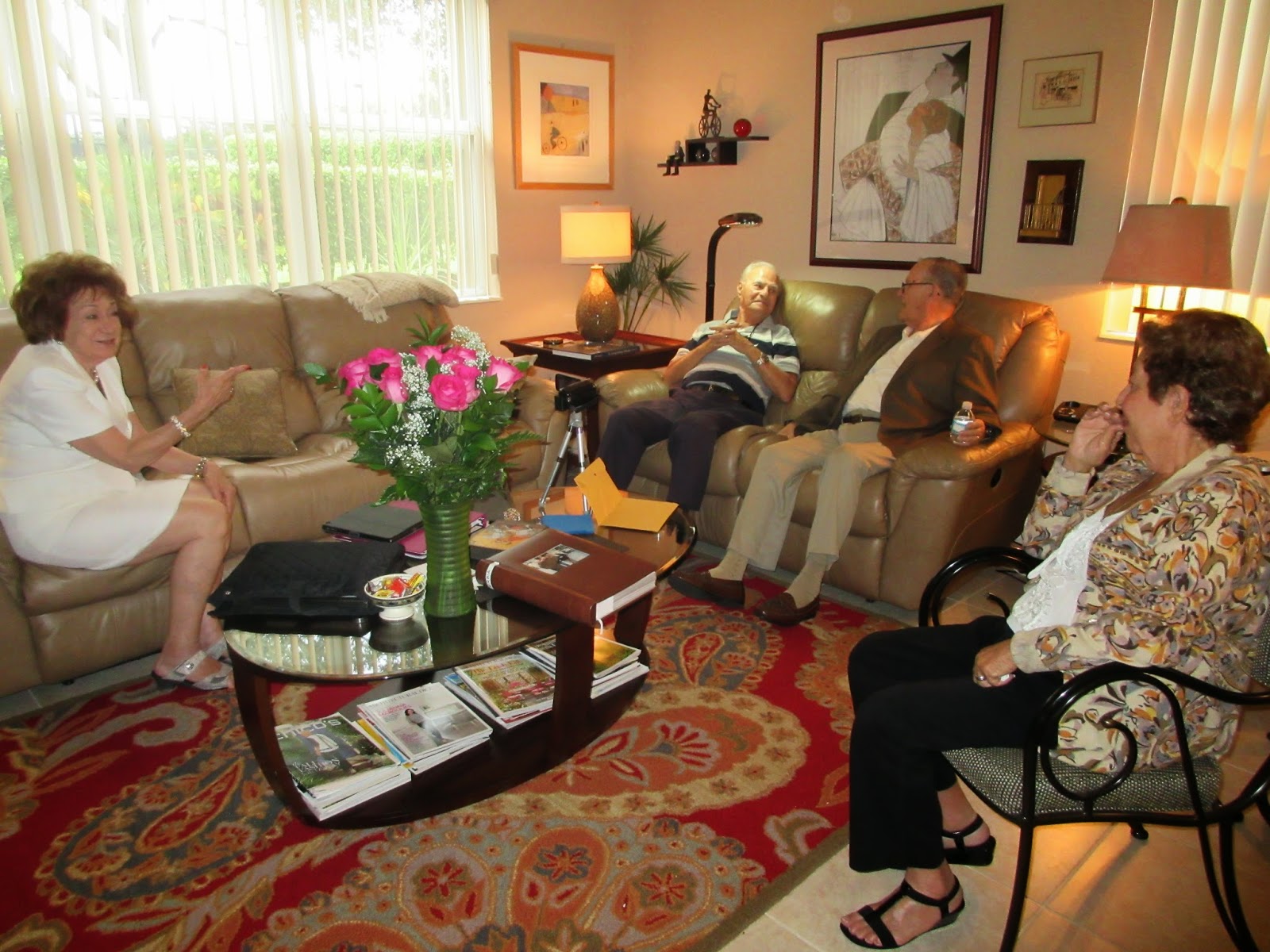 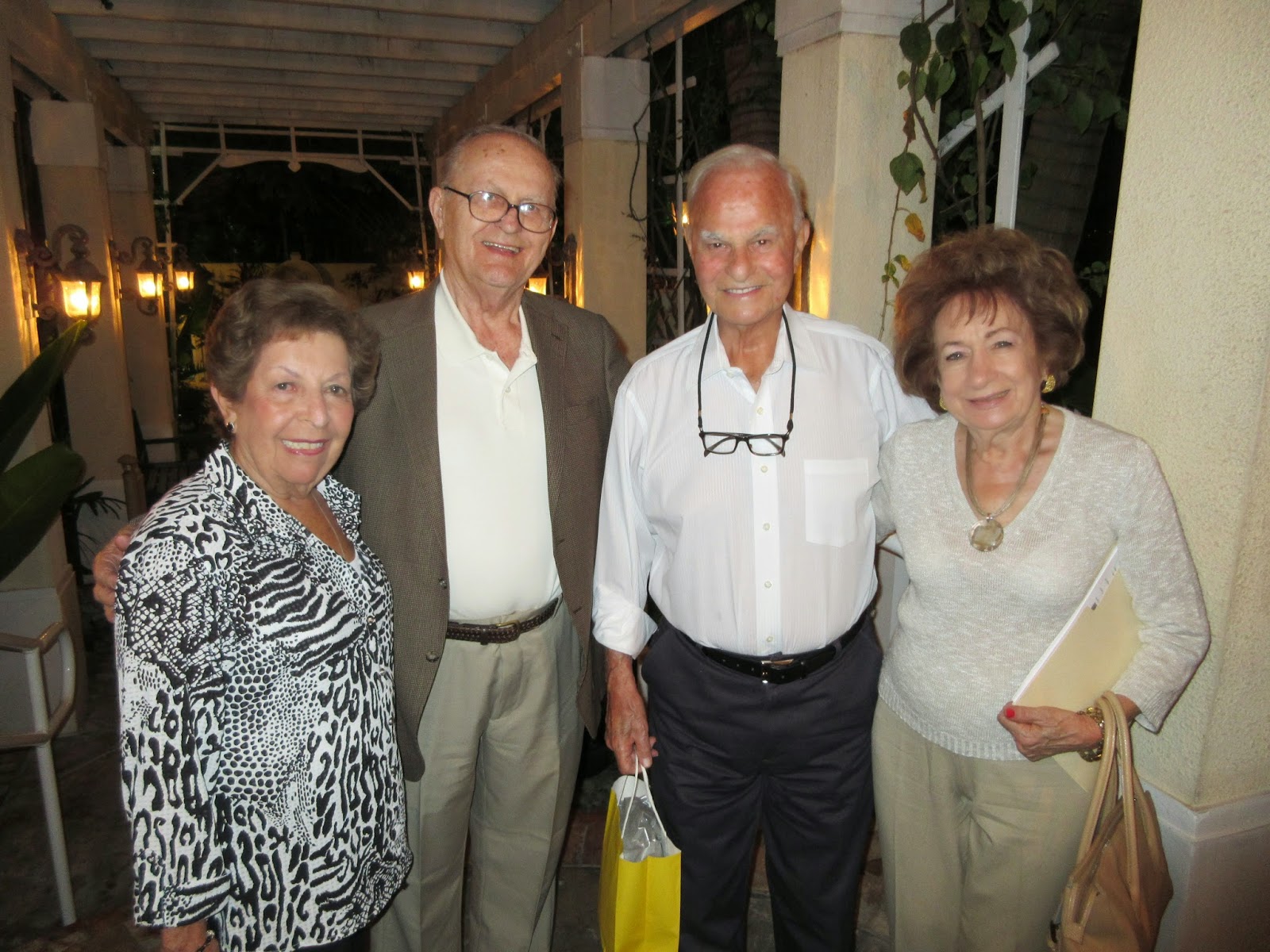 Germany and Italy along with their satellites attacked the Kingdom of Yugoslavia and occupied it within just two weeks.  I was 15 years old at the time.  I enjoyed listening to old warriors as they proudly talked about past wars and now they were disappointed, confused, and some were saying this occupation would last forever because all of Europe was under Nazi occupation.

We did not hear even one gun fired, but the news was about capitulation and Germany mobilized their military; they were thundering on our highways from Kragujevac to Kraljevo heading south.  Suddenly we heard an officer by the name of Dragoljub ‘Draza’ Mihailovich declared he would not recognize capitulation.  Instead, he would continue to fight the invaders and his starting point was Ravna Gora (flat forest).  He had a few officers with him that he dispatched to some locations throughout Serbia with instructions to organize and arm and most of all to train young men aged sixteen and older.  I turned sixteen on August 10, 1941 and joined the training center above the village of Zimovnik.

Our village of Godacica was part of the Ravna Gora movement.  The head of our local Ravna Gora organization was Commander Milorad Curlic, and the secretary was our school teacher (I have forgotten his name).  Milorad was a very respected man and if he asked us to do something, we did it….no questions asked.  One Saturday morning early in July 1944 I was with my cousin Dragisa and we walked from our staro celo to Godacica to find out our schedule for the following week. Most of the time our duties included guarding the roads around Godacica and other services.  That day we met Commander Curlic, and he asked if I knew the village of Pecenog and if I were to go there what direction I would take.  I explained the route I would take:  through the village of Panjevac then Milakovac followed by crossing the railroad and highway to Pecenog.  He said, "Very good.  Do you see those men sitting in front of the municipal building?  You are going to escort them to Pecenog."  I asked who they were and he only replied they were our allies. He then said, "I hold you responsible," and he pulled out his gun, held it to my forehead and said, "If anything happens to any of these men, this is what you will get."
There were nine of them, my cousin followed behind the group so no one would get lost.  One was injured and limping so we had to walk slowly so he could walk using a piece of wood as a crutch.  We walked a long time and then came upon wild blackberries beside the road.  They were so sweet and we stopped for a few minutes so they could eat them.  Then we had to go so I said “Hajde, hajde!" (come on let’s go!)  They didn’t understand me, they just repeated my words until I had to yell "HAJDE, HAJDE!!!"  and motioned for them to quickly follow.  I was so afraid to take too long because we had to cross the highway which was patrolled by the Germans.  We made it safely to the next meeting point.  We met the next escorts in Pecenog.  When I left the nine of them I saluted each of them to indicate I was leaving them with their next escort.  One of these men found a piece of paper and wrote something on it.  He handed it to me and I saluted them again and they all saluted back as though on command.
As Dragisa and I walked back to Godacica I looked at the piece of paper.  It seemed to be an address but it was written in a language I didn’t understand.  They didn’t speak Serbian and I had no idea what language they spoke!  So never dreaming I would ever have the need for it, I threw the piece of paper away.  This is my biggest regret to this day.
When we got back I reported to Commander Curlic that the mission was accomplished and the nine men were safely escorted to their destination.  He said, ‘Thank you very much."
I said, "May I ask who those men were that we escorted?"  He said, "Yes, they are Americans and I could not tell you this before because if the Germans captured you they would have forced you to tell them everything about our secret airport at Pranjani."  The Americans were bombing the petrol fields and refineries in Romania which supplied fuel for the German military.  This was happening throughout the spring and summer of 1944.  On their return these airmen were forced to parachute into Yugoslavia when their planes were attacked.
We were Chetniks and we had our orders...to protect and save them at all costs and escort them to Pranjani.
Nick (Beli) Mihajlovich

Posted by Aleksandra at Monday, September 08, 2014