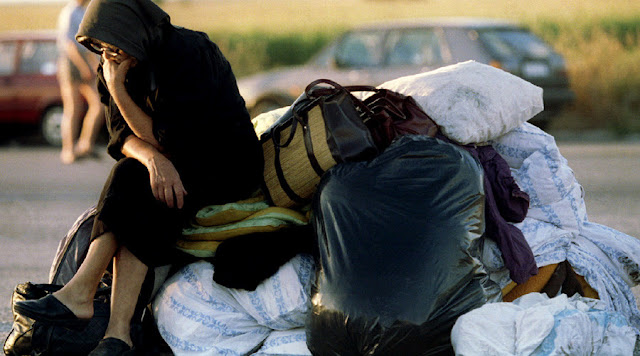 A Serb refugee from Krajina rests by her belongings August 13, 1995, on the main motorway near the Yugoslav capital. © Yannis Behrakis / Reuters
‘Operation Storm’ in August 1995, when Croatia overran the Serb-inhabited territory of Krajina, was the biggest single instance of ethnic cleansing in the Yugoslav Wars, Because the attack was backed by the US, however, it was never treated as a crime.
Between August 4 and August 7, up to 2,000 people were killed and over 220,000 driven from their homes by the Croatian army. No “invaders,” these Serbs had lived in the Krajina – their word for borderlands – for centuries. The 1995 onslaught was not just a final phase of the war that began in 1991, but a continuation of the 1940s Nazi atrocities, and a long, sordid history of oppression and betrayal going back to the 1800s.
In the late 1600s, the Hapsburg Empire (later Austria-Hungary) established a buffer zone along the border with the Ottoman Turks. in exchange for military service, the Orthodox Serb frontiersmen were granted religious liberties by the Catholic Hapsburgs. By the 1800s, the Ottomans were in retreat and Austria became obsessed with subjugating the Serbs and trying to subsume them into the Catholic Croat population. When Austria-Hungary disintegrated in 1918, the Croats chose to join the Serbs in a new South Slav kingdom – Yugoslavia – rather than be partitioned between Hungary, Austria and Italy. In April 1941, as Yugoslavia was invaded by the Axis powers, Croatian Nazis known as “Ustasha” declared an independent state with the backing of Hitler and Mussolini.
This Ustasha Croatia conducted a campaign of mass murder, expulsion and forced conversion of Serbs to Catholicism, which outright disgusted the Italians and made even some Germans recoil in horror. A Croatian legion was sent to the Eastern Front, where it perished under Stalingrad. When the Communist regime of Marshal Tito took over Yugoslavia in 1945, however, Croatian atrocities were hushed up for the sake of “brotherhood and unity.” 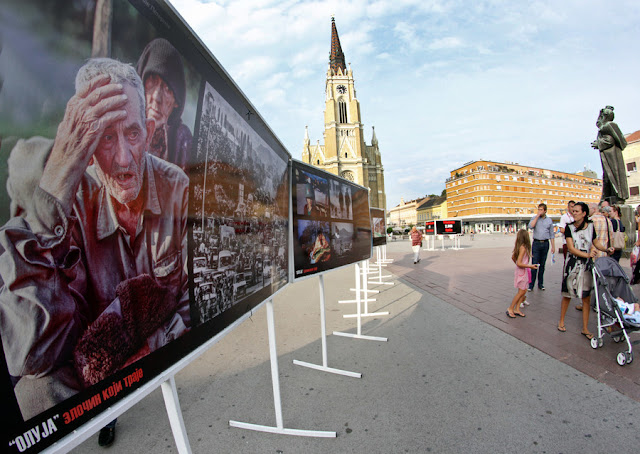 Exhibit of photographs from 'Operation Storm' in Novi Sad, Serbia, August 4, 2015 / Jaroslav Pap
The end of Communism in 1990 saw a revival of Nazi symbols and vocabulary in Croatia. President Franjo Tudjman denied Ustasha atrocities and expressed joy his wife was “neither Serb nor Jewish.” Serbs were stripped of equal citizenship and declared a minority. When Tudjman declared independence in June 1991, the Serbs saw 1941 all over again. They took up arms and declared the Krajina Republic – not denying the Croats their right to independence, but disputing Zagreb's claim to lands Croatia acquired under the same Yugoslavia it now sought to leave.

When the disintegrating Yugoslav Army backed the Krajina Serbs, Zagreb cried “Serbian aggression.” International pressure and UN sanctions sought to cut off Belgrade’s support for the rebels. When Tudjman failed to crush the Serb resistance, an armistice was arranged in January 1992. Krajina was placed under the protection of UN peacekeepers, dubbed UNPROFOR.

Meanwhile, the Clinton administration began backing Croatia and the Bosnian Muslims in their war against the local Serbs. In 1994, MPRI – a private company staffed with retired US military officers – was paid to train and equip the Croatian military. Officially, of course, they were teaching them democracy and human rights.

In May 1995, Croatia launched a strike on the Serb enclave of Western Slavonia. The UN did nothing, while the Western media was firmly focused on Bosnia. Everything was ready for the main event, dubbed “Operation Storm.” It began on August 4, with a predawn artillery barrage and the assault by 200,000 Croatian troops, trained by MPRI and armed with surplus Warsaw Pact weapons procured from eager Eastern European aspirants to NATO membership.

Three days later, most of Krajina’s Serbs had been expelled from their homes, while around 2,000 were dead. Churches, cemeteries and entire villages were razed to the ground, while refugee columns were strafed by fighter jets. Serbia did not react at all, prompting speculation to this day that Slobodan Milosevic was somehow “in on it” with Zagreb and Washington. A simpler explanation may lie in the fact that his Army Chief of Staff and spymaster were both working for the CIA at the time, as General Momcilo Perisic and Jovica Stanisic admitted years later.

The US-backed war crimes tribunal for Yugoslavia made a show of demanding the arrest and extradition of several Croatian generals involved in “Storm.” In April 2011, the tribunal convicted Ante Gotovina and Mladen Markac, while acquitting Ivan Cermak. However, the basis for their convictions was an arbitrary standard for artillery strikes never previously used – indeed, one that would have acquitted all the Serb officers charged with shelling civilians. The purpose of this became apparent when the tribunal cited this arbitrary standard as grounds for reversing Gotovina and Markac’s convictions on appeal, in November 2012.

By that time, Croatia had already been admitted to NATO (2009), and cleared for membership in the European Union, which it joined in 2013. 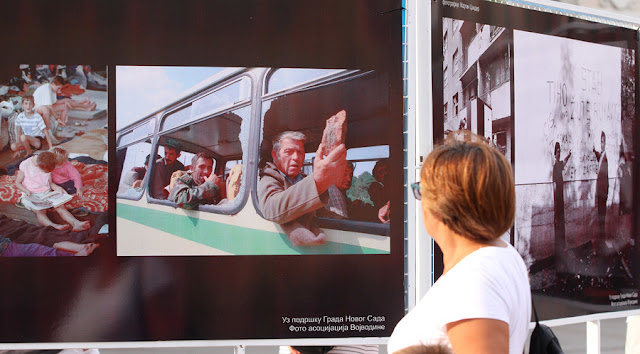 A woman in Novi Sad, Serbia, looks at a photo of a refugee column pelted by rocks in Croatia during August 1995's 'Operation Storm' / Jaroslav Pap
Washington claims to be engaged in Croatia to foster “a democratic, secure, and market-oriented society that will be a strong partner in Euro-Atlantic institutions.” Yet in his 1998 memoir 'To End A War,' US diplomat Richard Holbrooke paints a different picture, quoting a note from his colleague Robert Frasure written during a meeting with Croatian officials on August 17, 1995:
“Dick: We ‘hired’ these guys to be our junkyard dogs because we were desperate. We need to try to ‘control’ them. But this is no time to get squeamish about things.”
This was just ten days after the mass expulsion and murder of Serbs, as US diplomats directed the Croatian troops’ incursion into Bosnia. Meanwhile, Tudjman’s government gloated over achieving what their Nazi predecessors only dreamed of, thanks to its choice of sponsors. A 2001 census showed 380,000 fewer Serbs in Croatia than a decade prior, a change from citizens with equal rights to a statistical error. The US government was most certainly not “squeamish” – not then, and not now.
If all of this bears an uncanny resemblance to the crisis in Ukraine, that’s because it does. The US is using the same arsenal of accusations employed against Serbia in the 1990s to blame Russia for “aggression” in Ukraine. Those Ukrainians who refused to live under a pro-US coup regime in Kiev are demonized as “terrorists.” Meanwhile, the pro-Nazi elements in Ukraine are being given the same whitewash into “democratic reformers” as their colleagues in Croatia. They even have US troops training and equipping them, quite openly.
Last September, after Kiev's forces suffered a crushing defeat in attempting to subdue the rebels, one Ukrainian lawmaker suggested following Croatia’s example. While tolerating the existence of Krajina for three years, wrote Yuriy Lutsenko, the Croats strengthened their military and the economy. “And then in a couple hours, a tank attack wiped the separatists off the face of the earth,” he said.
Lest there be any confusion, Lutsenko was the head of the majority Poroshenko Bloc in Ukraine's parliament. Washington routinely describes the regime of President Petro Poroshenko as democratic reformers bent on bringing Western values to Ukraine – at gunpoint, apparently. 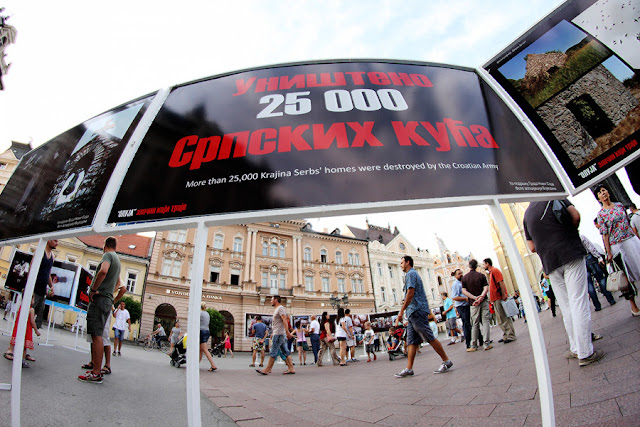 Some 25,000 Serb homes were destroyed in 'Operation Storm'; a panel at the August 2015 photo exhibit in Novi Sad, Serbia / Jaroslav Pap
Croatia marked the 20th anniversary of its victorious crime with a military parade and a statue of President Tudjman in the formerly Serb city of Knin. The lands “liberated” in 1995 remain “scattered ghost villages strewn with shell-scarred houses overgrown with ivy and tall grass,” to quote a Reuters description from 2005.

Washington was not content with crushing Krajina. In 1999, NATO attacked what was left of Yugoslavia and occupied Kosovo, a southern province of Serbia, declaring it an independent state in 2008. In October 2000, the US organized a “color revolution” in Belgrade, the first of its kind, bringing into power a puppet government. Serbia has been ruled by client regimes ever since.

By rewarding Tudjman's atrocities, the West has effectively endorsed the Croatian Nazi atrocities from the 1940s, of which the 1990s policy was a continuation. Two decades after “Operation Storm,” Krajina stands as a symbol of the conviction that the US and its “junkyard dogs” – whether in Zagreb, Kiev, or elsewhere – can act with absolute impunity. Likewise, the fate of Krajina and the Serbs in general is meant to be a message to the world that resistance to US goals is futile.

But the East remembers.


The statements, views and opinions expressed in this column are solely those of the author and do not necessarily represent those of RT

Posted by Aleksandra at Wednesday, August 05, 2015