JUSTICE PREVAILS EVEN IN DEATH - A VICTORIOUS VINDICATION FOR GENERAL DRAZA MIHAILOVICH! / By Aleksandra Rebic July 17, 2015 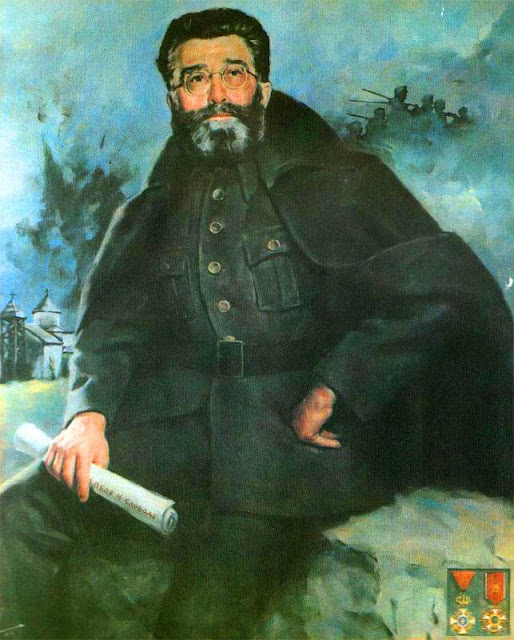 
A VICTORIOUS VINDICATION
FOR GENERAL DRAZA MIHAILOVICH
AS JUSTICE PREVAILS EVEN IN DEATH!
On May 14, 2015 what so many of us have been hoping and praying for all these years finally came to pass! As the world marked the 70th anniversary of the end of World War Two, one of the war's greatest heroes and martyrs was officially rehabilitated by the Higher Court in Belgrade, Serbia! The historic decision was final, reversing one of the most unjust convictions in the history of mankind, and restored all civil rights to Serbian General Dragoljub Draza Mihailovich, falsely charged, tried, convicted, and executed by the Yugoslav Communists in July of 1946.
I opened www.generalmihailovich.com, my website dedicated to General Mihailovich, back in July of 2006, in honor of the 60th anniversary of his death, and that is the same year that the request for the official rehabilitation of Mihailovich was first initiated in Belgrade. It has been nine long years since then, with many setbacks and continuances in the rehabilitation process. Though many lost hope that it would ever come to fruition, others did not. While many of Draza's loyal patriots did not live to see that day in May come to pass and many of those American and Allied WWII veterans he saved during the war did not live to see that day, their departed souls celebrated along with us.
The coming days, months, and years will be filled with righting the wrongs of the last 70 years, but the biggest obstacle has finally been overcome. With great respect I declare to the Higher Court in Belgrade - "Well Done and Thank You!" Indeed, on that day, May 14, 2015, Serbia found its soul!
On the eve of the May 14th Rehabilitation Hearing in Belgrade, in hopeful anticipation of its successful outcome, I asked my father, a WWII Serbian Chetnik veteran, to share any thoughts he might have should the High Court in Belgrade finally render justice. He summed it up perfectly:
"The rehabilitation of General Draza Mihailovich is solid proof that the Partisan movement in Yugoslavia was a living lie. They had to kill him to be able to continue promoting their lies for 70 years."
Rade Rebic
My father's words remind us that the work must continue. Our fathers and grandfathers did the heavy lifting - they walked the walk. They fought the war and the long and hard battle for vindication after the war. They never quit. I only wish that those who have departed could have lived to see that day in May. It's now up to us.
I propose the following four goals:
1. Collect all the books filled with the lies of the last 70 years. Though I am adamantly opposed to the burning of books, the books filled with communist lies that have poisoned the historical record with regards to General Mihailovich and the Chetniks need to be collected and put away somewhere where they can no longer poison any more hearts and minds.
2. Revive the movement to establish a Monument to Mihailovich in Washington, D.C. in gratitude for his having saved the lives of over 500 American Airmen who were shot down by the German enemy, falling onto Nazi-occupied territory in 1944. These American Airmen were rescued and protected by the Chetnik forces and Serbian people loyal to General Mihailovich under the most difficult of conditions, even AFTER they and their commander had been abandoned by the Allies. Every last one of them were evacuated to safety and returned to their homes. Thousands of their descendants are alive today because of the selfless acts of General Mihailovich and his forces.
3. Make General Draza Mihailovich a Christian SAINT in the Serbian Orthodox Church.
4. Proclaim May 14th a national Serbian holiday and establish that date as the SLAVA of General Mihailovich, making it the Patron Saint's Day dedicated to him and celebrated forevermore by Christians all over the world.
To all those individuals and groups who initiated and participated in the Rehabilitation process from its inception in 2006 to that day in May 2015, nine long years later: "Thank You" for never quitting, for keeping the faith, and for maintaining the courage of your convictions no matter how many setbacks you had to endure.
To all those who have supported the Mihailovich Rehabilitation process and have kept the great General in your prayers and who never lost faith no matter how many disappointments you had to endure: "Thank You."
And most of all, to the one and most Holy God without whom none of us could have endured and none of this could have come to pass: "Thank You." God's justice ALWAYS prevails.
To our dear General Mihailovich: I hope that on that day you were with your Serbian patriots, with your brothers in arms, with your civilian men and women who loved and followed you regardless of the price, with the American and Allied WWII veterans like Richard Felman, Curtis "Bud" Diles, Arthur "Jibby" Jibilian, Charlie Davis, Nick Lalich, George Vujnovich, George "Guv" Musulin, and with so many others who are no longer with us here on earth who honored your legacy to the very end. I hope that you are celebrating with great joy in your hearts. You deserve it!
You see, no one ever really dies as long as they are remembered. This July 17th anniversary of your mortal death will pass like all the others. Except now we've turned a corner, and we will keep going in keeping your legacy alive and flourishing with the victory of vindication now lighting the way!
LONG LIVE GENERAL MIHAILOVICH!
GLORY TO GOD!
Sincerely,
Aleksandra Rebic
July 17, 2015
Chicago, USA