Croatia government under fire for failing to tackle pro-Nazis / "The Times of Israel" Sept. 12, 2017

Croatia government under fire for failing to tackle pro-Nazis

Far-right group put up a memorial plaque to its members at former extermination camp of Jasenovac. 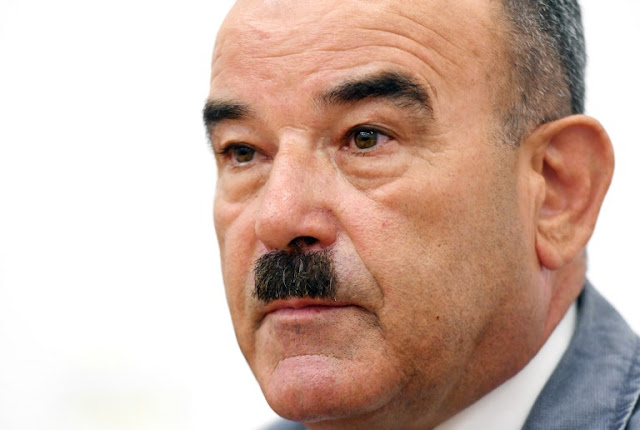 Marko Skejo, the president of the Croatian paramilitary veterans group HOS, speaks during a press conference in Zagreb, after a memorial plaque with an Ustasha pro-Nazi slogan was moved from the vicinity of the WWII extermination camp of Jasenovac, to a Croatian memorial site near Novska on September 7, 2017. (AFP PHOTO / STRINGER
ZAGREB, Croatia (AFP) — With his Hitler-style toothbrush moustache, ex-fighter Marko Skejo leaves no doubt about his politics: the now-disbanded paramilitary unit he fought for displays open nostalgia for a pro-Nazi past that Croatia is struggling to tackle.
The unit, the Croatian Defense Forces (HOS), last week said it would continue to display a memorial plaque for its comrades killed in Croatia’s 1990s independence war which bears the pro-Nazi slogan “Za dom spremni” (“For the Homeland, ready”).
It was the official motto of the fighting group — which disbanded in the early stages of the war — and appears on their coat of arms.
The phrase was used by the country’s World War II Ustasha regime, which persecuted and killed hundreds of thousands of Jews, Serbs, Roma and anti-fascist Croats.
Ex-paramilitaries had put up the plaque last November by the site of the former Jasenovac camp, known as “Croatia’s Auschwitz,” sparking outrage from the country’s ethnic minorities, rights groups and centre-left opposition. 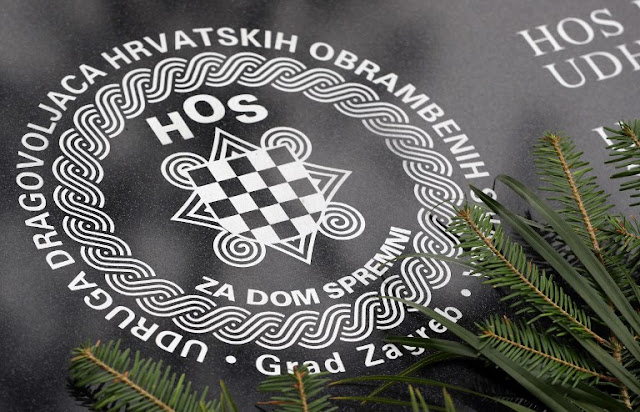 A memorial plaque with an Ustasha pro-Nazi slogan is pictured after it was moved from the vicinity of the WWII extermination camp of Jasenovac, to a Croatian memorial site near Novska on September 7, 2017. (AFP PHOTO / STRINGER)

After days of negotiations with authorities, HOS agreed to remove the plaque from the camp’s immediate vicinity — only to display it in another location around 10 kilometres (six miles) away.

“No one can touch this… We achieved our goal,” an HOS leader, Ivan Friscic, told a press conference as his comrades chanted their controversial slogan.

Skejo said authorities had failed to remove the slogan from the plaque — “we would be the biggest good-for-nothings if we ceded that.”

Many Croatians were indignant about Conservative Prime Minister Andrej Plenkovic’s handling of the episode.

“Plenkovic caved in to glorifiers” of the slogan, said a comment piece in the Jutarnji List newspaper, while Davor Bernardic, leader of the opposition Social Democrats, said the authorities were “inciting fascism.”

Although the Ustasha’s so-called Independent State of Croatia was a Nazi puppet state, their modern sympathizers such as Friscic and Skejo see the regime’s leaders as the nation’s founding fathers.

After the country declared independence from Yugoslavia, sparking the 1991-1995 conflict, a number of political emigres who were linked to or sympathized with the Ustasha regime returned to Croatia. 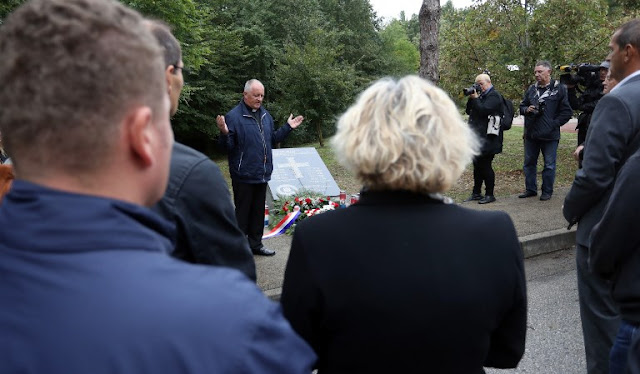 Local priest Zlatko Koren (Rear L) delivers a sermon in front of memorial plaque with an Ustasha pro-Nazi slogan, after it was moved from the vicinity of the WWII extermination camp of Jasenovac, to a Croatian memorial site near Novska on September 7, 2017. (AFP PHOTO / STRINGER)

“They had a view of World War II which was completely different from the one taught not only in the former Yugoslavia but in the whole world,” historian Hrvoje Klasic told AFP.
Some were given important political or economic positions or joined the country’s defense forces, enabling them to establish their narrative in society, Klasic said.

In the 1990s numerous monuments to anti-fascists were destroyed and street signs were renamed after Ustasha officials.

Although extreme Ustasha sympathizers are today a tiny minority, they face little resistance from those in power.

In January, a Croatian school refused to display an exhibition on Jewish diarist Anne Frank because it included panels detailing the former regime’s crimes.

Their leader was eventually arrested, but earlier this month he and his supporters publicly burned a weekly Serb publication in front of its premises.

The leader of Croatia’s ethnic Serbs Milorad Pupovac said the Ustasha revival had not been dealt with “in an adequate way.” 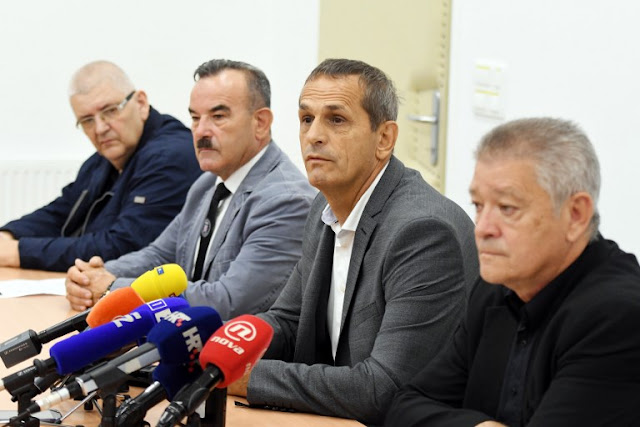 (From Right) Vian Friscic, Borislav Barisic, Marko Skejo the president of the Croatian paramilitary veterans group HOS, and Anto Dapic speak during a press conference in Zagreb, after a memorial plaque with an Ustasha pro-Nazi slogan was moved from the vicinity of the WWII extermination camp of Jasenovac, to a Croatian memorial site near Novska on September 7, 2017. (AFP PHOTO / STRINGER)
Zagreb recently stripped the name of former Yugoslavian leader Josip Broz Tito from a prominent square, an initiative led by the right-wing politician Zlatko Hasanbegovic, a former culture minister accused of revisionism.

The “Za dom spremni” slogan, regularly chanted by football fans, was recently downplayed by Croatia’s President Kolinda Grabar-Kitarovic, who called it an “old Croatian salute” — a claim denied by historians.

However, over the weekend she appeared to shift her position and described the slogan as “unacceptable,” echoing the words of the prime minister. 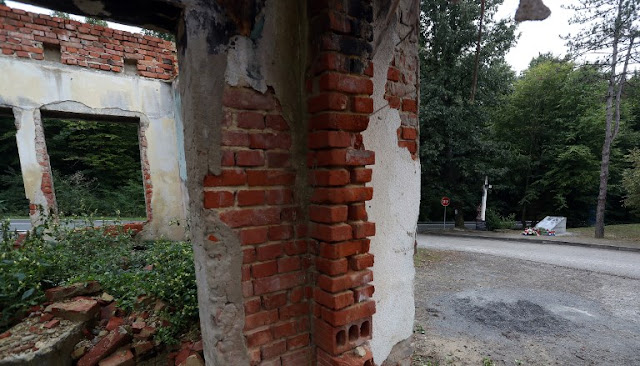 A memorial plaque with an Ustasha pro-Nazi slogan (Rear R) is pictured next to a house demolished in the indepence war, after the plaque was moved from the vicinity of the WWII extermination camp of Jasenovac, to a Croatian memorial site near Novska on September 7, 2017. (AFP PHOTO / STRINGER)

Plenkovic, who came to power nearly a year ago, said that moving the plaque was a “first step” and he has promised a law against symbols of “all totalitarian regimes” — referring to both the Ustasha and communism.
But his detractors say he has failed to act on his promise to move away from a climate of intolerance that developed under the previous government, marked by hate speech against ethnic minorities and pressure on independent media.
“Instead of governing the country the government is dealing with how to maintain its majority,” he said.
Political analyst Zarko Puhovski said the premier was more focused on how to stay in power, faced with a thin majority and his Croatian Democratic Union (HDZ) party torn between its centrist and nationalist wings.