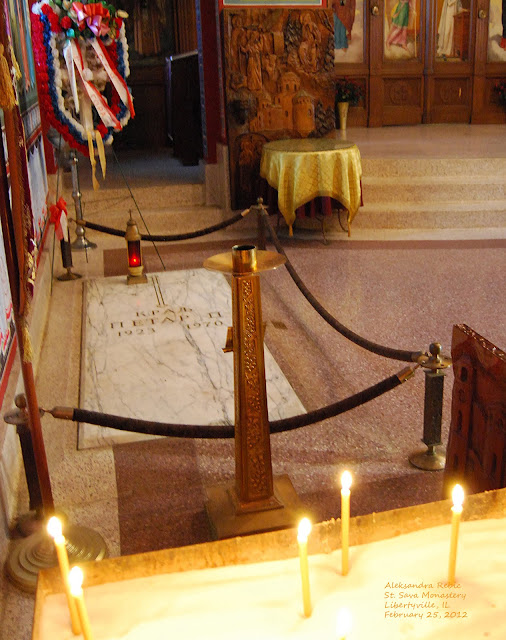 The former gravesite of King Peter II
in St. Sava Monastery before his remains were
exhumed and transferred to Serbia. This was his gravesite for 42 years,
from the time he died in November of 1970 to January of 2013.
Photo by Aleksandra Rebic, February 25, 2012.


The former gravesite of King Peter II
in St. Sava Monastery in Libertyville, IL U.S.A.
after his remains were exhumed, January 17, 2013.
Photo courtesy of Vera Dragisich.
Aleksandra's Note:
It's been almost a month since the remains of the only European king buried on American soil, HM King Peter II Karageorgevich, were exhumed at the request of the Serbian Royal Family on January 16/17, 2013 in a top secret operation that took millions of Serbs by surprise. The immediate reaction was shock and disbelief, and the subsequent silence, temporary as it was, was deafening.
Once the reality sank in, Serbs all over the world were left to digest what had just happened and how they felt about it.
Many Serbs were ecstatic that King Peter II was finally going home to be laid to rest in the homeland he was forced to leave during the Nazi occupation of Yugoslavia in World War II. Others, especially those in the Diaspora, were left feeling sad that they were not given a chance to say "Good-bye" to their King before he left America forever.
I'm grateful, especially now, that I made it a point to photograph the gravesite over the years while King Peter II was still interred there, and I know that as beautiful and special a place as St. Sava Monastery in Libertyville is, it will never be the same now that the King is gone.
The state funeral in Serbia is planned for May 26, 2013. I wish I could be there in Serbia this May, just as I wish I had been there to say "Good-bye" in Libertyville in January.
May you finally rest in peace, King Peter II.
WE WILL MISS YOU.
Sincerely,
Aleksandra Rebic
*****
If you would like to get in touch with me, Aleksandra,
please feel free to contact me at ravnagora@hotmail.com
*****
Posted by Aleksandra at Sunday, February 10, 2013