"Tito's Flawed Legacy" by Nora Beloff - INTRODUCTION / A harbinger of things to come.


Aleksandra's Note: The value of the material found in "old" books cannot be overestimated. There is so much in "old" books and materials that is striking in its relation to future and current events. Quite often, we can find the answers to the questions we have today about "how did this happen?" by going back in time and revisiting the spoken and published words of the past. The impact of the revelations is often remarkable. The answers were all there, if only we had paid attention. Some of us did, indeed, pay attention but were not in a position to affect the outcomes.

Anyone interested in the intriguing and often confusing topic that is former Yugoslavia should find and read this book, Tito's Flawed Legacy, by respected British journalist Nora Beloff. The book was published in 1985, after Tito's death, but while Yugoslavia was still completely intact and a few years before the break-up wars in the last decade of the 20th Century, the 1990's, began.

In light of cataclysmic future events in the Balkans, the last paragraph of Beloff's introduction from 1985, posted in full below, is particularly striking:

"The answers to the Yugoslav problem are not easy: the most this analysis sets out to do is to identify the degree of Western guilt for the distress in which Yugoslavia now finds itself and so, perhaps, to encourage a radically different Western approach."


A special thank you to my friend AL, who contributed this important text. 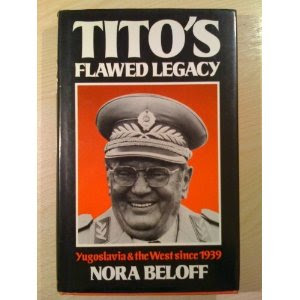 Tito's Flawed Legacy
Yugoslavia and the West since 1939
By Nora Beloff, 1985
Introduction