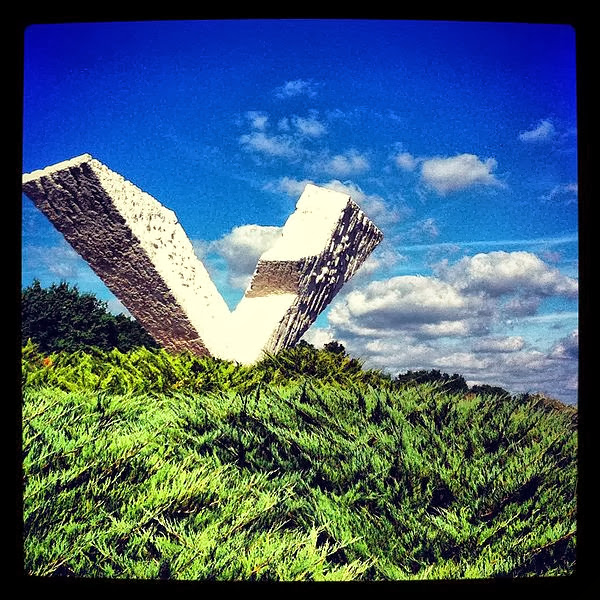 Monument to the victims of the Kragujevac Massacre
of Serbian civilians by the Nazis in October of 1941.
Photo courtesy of Wikipedia Commons.
THE KRAGUJEVAC MASSACRE
of October 1941:
A Legacy of 'Never Forget'
By Aleksandra Rebic

The policy was the Nazi response to the first successful organized uprising in occupied Europe. The Serbian resistance forces under the command of Serbia’s General Draza Mihailovich not only threatened Germany’s southern flank in Europe and her occupation of Serbia after Yugoslavia fell to Hitler in April of 1941, but critically delayed Hitler’s planned attack on the Soviet Union that summer. The Germans retaliated, but it wasn’t in the usual way - man to man, soldier to soldier. The method of Nazi retaliation initiated against the Serbs was unprecedented, and the target was the civilian population. Hitler’s aim was to suppress the Serbian insurgency against the Nazis and to do so by the most brutal means. He intended to literally terrorize the Serbs into submission by going after their most vulnerable citizens, and he decreed his intention via the new “law” in Serbia that took effect in the late summer of 1941.

Although there are so many documented atrocities that were committed against civilians during the course of World War Two throughout Europe, there are still those atrocities that stand out as singular examples of man’s capacity for inhumanity against man. The Kragujevac Massacre of October 1941 is one of those singular examples, and it would have a profound effect on the way that General Mihailovich and his Chetnik forces would conduct their military operations against the enemy German forces ever afterward.

On September 6, 1941, after a series of successful Chetnik attacks against German forces in western Serbia, Adolph Hitler issued the unprecedented reprisal decree that for every German killed, 100 Serbian hostages would be executed. For every German wounded, 50 Serbs would be shot. This decree was posted throughout Belgrade, Serbia on September 13, 1941.

General Boehme, the German Commanding General of the occupation forces in Serbia from September 16 to December 2 of 1941, issued three orders to supplement Hitler’s decree. These orders were dated September 25, October 14, and November 10th of 1941. “Order to the German Army in Serbia” was the first of Boehme’s orders, and it was unequivocal in its lack of mercy:

“As a result of the Serbian rebellion, hundreds of German soldiers have been killed. Our losses will be enormous unless we crush the rebellion without mercy.

"Your task always is to be in total control of every village in this country in which German blood was shed also in 1914.

"The heavy hand of our retribution must be felt by the entire population of Serbia. Those who show them pity, thereby deny pity to their own. Any such person will be court-martialed, whoever he may be.”

October of that same year, 1941, would prove just how “unequivocal” the lack of German mercy against their chosen victims would turn out to be. At the end of September, continued Serbian successes against the advancing Wehrmacht forces in a Chetnik anti-Axis action that took place between Gornji Milanovac and Kragujevac in Serbia resulted in 10 Germans killed and 26 Germans wounded. The German forces that were deployed at that time in the Serbian city of Kragujevac were under the command of Major Paul Koenig. In response to the German casualties, Koenig ordered a “comprehensive reprisal” to be carried out against the Serbian civilians living in Kragujevac, even though no attacks had been made in that city against the Wehrmacht!

The reprisals began on October 19th as Germany military forces burned several villages and several hundred Serbian civilians were executed in the Groznice area. But, that did not satisfy the Nazis. On October 20th, 2,300 men and young boys were rounded up, all between the ages of 16 and 60. In this group were included civil servants from city offices that the Germans raided, who were not engaged in any military actions. But the crowning atrocity was the inclusion of 300 innocent children from the high school and 18 teachers who were ripped from their classrooms. On October 21, 1941, those lives were mercilessly ended. All in all, the estimated number of civilians who were executed in Kragujevac and the surrounding areas in those couple of days in October of 1941 is 2,800. 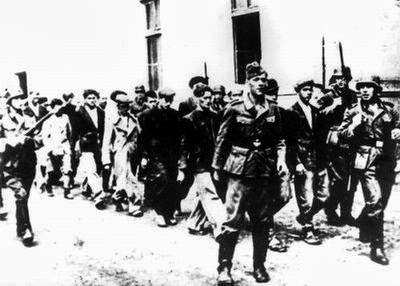 German troops lead their Serbian victims to the execution site. 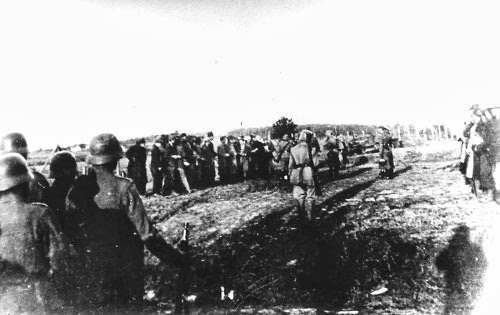 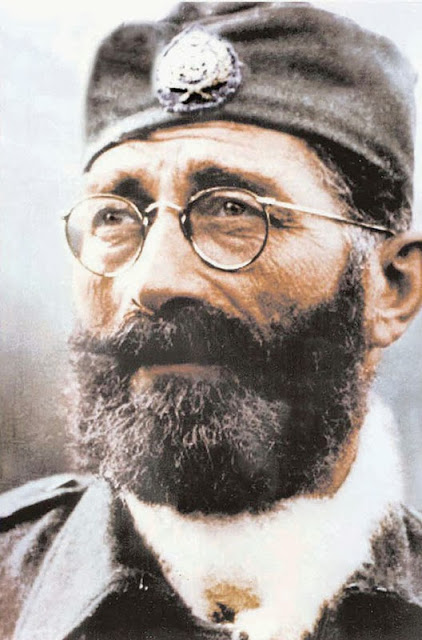 General Dragoljub Draza Mihailovich WWII
Such wartime decisions are testament to just how completely dedicated to his nation and the welfare of her people General Mihailovich was and remained. Those to whom the tragedy of October 1941 in Kragujevac never meant anything, later attacked Mihailovic for “not killing enough Germans”. The people that rendered these charges against General Mihailovich would later prove to be of inferior character, while Mihailovich would emerge as a man of true character, not only as a military commander, but as a truly good human being in the badness that is war. Even as he was being charged falsely by the Allies for “not being active enough against the enemy,” he would save hundreds of Allied lives from sure death at the hands of the enemy when he could have walked away and left them to the wolves.
Though the legacy of Kragujevac remains a tragic reminder of the inhumane nature of war, so, too, the legacy of General Mihailovich and his thoughtful response to such a tragedy transcends such brutality and reminds us that even in war there is humanity.
Aleksandra Rebic
October 2013
*****
If you would like to get in touch with me, Aleksandra, please feel free to contact me at ravnagora@hotmail.com
*****
Posted by Aleksandra at Monday, October 21, 2013