*****
“Despite now being over twenty years since his death there is not a day goes by without my thoughts retracing the happy times I spent within his presence.”
-Andy Evans, co-author of Displaced,
speaks about his grandfather Maksim Ćulumović
Displaced is a true account of the parallel lives of a Yorkshire lad and Bosnian Serb lass. Despite neither knowing about the other, they eventually discover they are family, connected by extraordinary grandfathers.

Andy Evans was born and raised in a tight knit mining community in West Yorkshire. He simply idolised his grandfather Maksim. Growing up, Andy realised his secretive Deda seemed to have no past, simply appearing in post-war Britain as if from the sky. By the time the miners’ strikes were over, freeing Andy to return to the task of discovering his grandfather’s story, Maksim had passed away. Yet Andy refused to allow that book to remain closed. His quest brought him out of his comfort zone, indeed to gunpoint.

Vesna Kovac grew up in Yugoslav Bosnia, an unwilling witness to the nation’s descent to war. To survive, she worked at the colossal munitions factory in Novi Travnik, hostage to its increasingly strategic importance during the course of the war until she eventually escaped to live in the US.

Then one day, Vesna caught word of the curious expedition by a Yorkshire man in search of memories of his grandfather. A search which stirred up fond memories of her own deda, a certain Ostaja Ćulumović…

Author Andy Evans told Britić he cannot fully explain what drove him to overcome such odds to seek out his deda’s past:

“Maybe it was the mystery surrounding him, maybe it was simply that he was an extraordinary character which has continued my close connection to him despite the passing of time.

“I deeply regret that Granddad never sought to ‘Serbianize’ me. Although he followed the British way of life, he also maintained the proud heritage held close within him,” says Andy, who remembers being envied as a child for having not one but two Christmas Days a year and has more recently re-adopted his family slava of St George.

He shares memories of his grandfather which may resonate with some readers: arguing about politics while playing chess; a life of near complete self-sufficiency growing even his own tobacco in allotments; or how he would stand each morning, stripped to the waist, and bathe himself at the kitchen sink. Unfortunately, he notes the decline in local Serb communities means that chances to share such experience with other British Serbs is being lost.

“Each generation sadly seems to lose a little more of its heritage and tradition. Thankfully Britic Magazine has helped me to keep up to date with events that may be happening within the Serbian Community. For once I now feel less of an ‘Island’, cut off from those with a similar background to that of my own.” 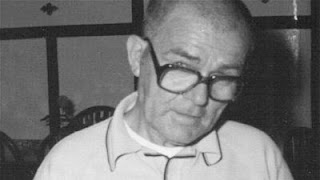 Maksim allowing his picture to be taken
in an unguarded moment
Andy acknowledges there are some mysteries he has yet to uncover, for example the position and division his grandfather held in the Chetniks:
"I remember once asking Granddad what rank he held within the army. As if playing a game he asked me to guess.
"Corporal?” I asked. With a smile and a gesture with his hand he simply replied “Higher.”
“Sergeant?” Now captured by the game I asked.
Again the hand gesture and “Higher,” came the reply.
“Sergeant Major?”
With a smile he turned and left the room. Before reaching the door he voiced the words,
“Higher”.
In his final weeks, and with the cancer now spread to his brain, he began to live out his past from the hospital bed.
He would speak of leading his men through the mountains towards Italy. He would relate to thousands losing their lives and only fifty men crossing the border to safety.
Throughout the whole of my twenty year search I have however only uncovered two photographs of him online. One is of the Ravna Gora Corps pictured near to Požega in Serbia, the other depicts him kneeling in front of a group of Chetniks with King Petar in a displaced persons camp in Germany."
Maksim was always reluctant to be photographed and was fearful of Tito’s agents. Andy points out, “To point the camera was like pointing the gun. No way could a picture ever be taken.”
When Maksim first came to the UK he was offered a stark choice: work the mines or face deportation quite probably to his death. He never felt bitter or cheated, despite the fact that he broke his back in the Yorkshire mines:
"The only time I ever heard Granddad display any bad feelings was if there were ever mention of Winston Churchill. He would say that Churchill had betrayed his people and was responsible for the death of thousands. He refused to claim British Citizenship…[saying] that if he were to return home then he would do so as a Serb and not as an Englishman." 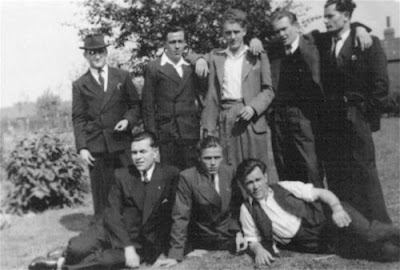 Displaced Yugoslavs enjoying the sun in the grounds of Saville Park,
adjacent to the Miner's Hostel. Maksim Ćulumović at front, far right
Often Serb families do not relay traumatic experiences in vivid (or any) detail to the next generation, despite long suffering. Andy has his own opinions about
this.

"Granddad dealt with his particular horrors and held them deep within himself. Mom recalls, as a child she would often be awoken to his screams and cries as sleep opened up the scars of his experiences.
"On rare occasions he would lose himself in sorrow and speak momentarily of having witnessed his own son being tied to a wooden stake and repeatedly stabbed by laughing madmen until he was dead.
"Looking back I feel that Granddad had suffered and witnessed so much hatred and bloodshed that he wanted to spare us from his own experiences in the hope our own lives would never be tarnished as it had so cruelly been for him."
Andy and Vesna took the deliberate approach of avoiding casting blame or retribution. Instead the book was about a twenty year search to uncover truths often buoyed by humour and a keen observation of the absurd.
After his first meeting with his newfound family he looks forward to going back frequently and admits, “The essence of the country is like a drug running through my veins. For me it felt as if a magical veil had enveloped me and continues to draw me deeper into its fabric to this day.”
Andy’s pursuit has been life-changing. He has caught the writer’s bug and plans to write a book of Serbian children’s folklore stories.
“I realise now that everyone we meet has a story within them.I feel saddened at times to realise so many of my generation never got to ask the questions I had raised. With the death of our loved ones so too dimishes the past, a past and history I feel deserves to be uncovered and held with pride and hope for the future.”
*****
http://www.ebritic.com/?p=113499

Displaced is available from
http://www.lulu.com/product/paperback/displaced/16253170. 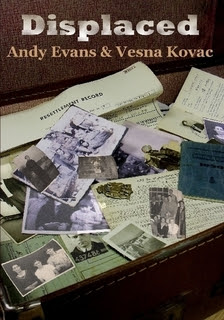 *****
If you would like to get in touch with me, Aleksandra,
please feel free to contact me at ravnagora@hotmail.com
*****
Posted by Aleksandra at Monday, October 03, 2011