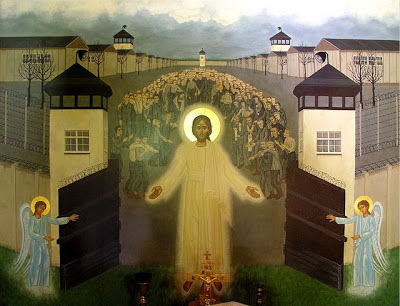 Icon of Christ opening the gates of Dachau


Aleksandra's Note: Many thanks to St. Elijah Serbian Orthodox Church in Aliquippa, Pennsylvania for sharing this important Easter story - a piece of human history truly in the spirit of this blessed, holy holiday.
Sincerely,
Aleksandra Rebic
*****
From Liz, JR Meinhold: Easter Services in Dachau, WWII posted by St. Elijah Serbian Orthodox Church on May 4, 2013:
During Holy Week, the infamous Dachau Concentration Camp was liberated by American military forces on April 29, 1945. Unknown to many is the fact of the thousands of Christians that were imprisoned at Dachau. Without a church, altar, chalice, books, candles, incense, bread or wine the Orthodox faithful still celebrated Pascha on May 6, 1945.... They had only one icon of the Theotokos. In a cell block several Greek, Serbian, and Russian priests and one Serbian deacon, wearing makeshift vestments made from towels of the SS guards, gathered with several hundred Greek, Serbian and Russian Orthodox prisoners to celebrate Paschal Vigil. A Russian Orthodox prisoner named Gleb Rahr wrote this moving description of the holy service:

"In the entire history of the Orthodox Church there has probably never been an Easter service like the one at Dachau in 1945. Greek and Serbian priests together with a Serbian deacon wore the makeshift vestments over their blue and gray-striped prisoners uniforms. Then they began to chant, changing from Greek to Slavonic, then back to Greek. The Easter Canon, the Easter Sticheras – everything was recited from memory. The Gospel – “In the beginning was the Word” – also from memory. The Homily of St. John Chrysostom also from memory. A young Greek monk from the Holy Mountain stood up in front of us and recited it with such infectious enthusiasm that we shall never forget him as long as we live. St. John Chrysostomos himself seemed to speak through him to us and to the rest of the world as well! "

Patriarch of the Serbian Orthodox Church Gavrilo Dozic and Bishop (now a Saint) Nikolaj Velimirovic, were incarcerated at Dachau for several months. There is a Russian Orthodox chapel at the camp today, and it is well known for it's icon (see above) of Christ freeing the Dachau prisoners. 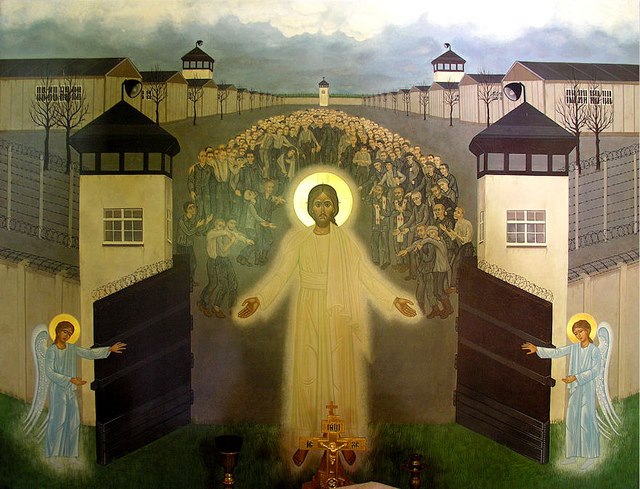 http://www.orthodoxytoday.org/articles-2009/Cramer-Dachau-1945-The-Souls-Of-All-Are-Aflame.php
http://www.antiochian.org/souls-aflame
*****
If you would like to get in touch with me, Aleksandra,
please feel free to contact me at ravnagora@hotmail.com
*****
Posted by Aleksandra at Saturday, May 04, 2013