Aleksandra's Note:
There are points made in this article that remain in dispute,
such as the reference to "cooperation with the Axis powers", etc.
*****


BELGRADE -- A state commission has determined that World War II Yugoslav Army General Dragoljub Draža Mihailović was killed and buried at a river island in Belgrade. 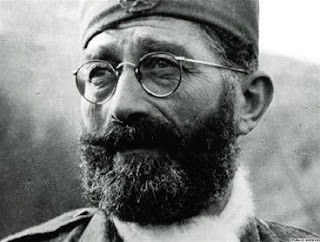 General Mihailovich circa 1943
Members of the commission in charge of revealing the truth about Mihailović’s death have announced that the Ravna Gora Movement leader was buried near a location on Ada Ciganlija where a prison once stood.
Commission President Slobodan Radovanović said that, according to the information obtained by the commission, Mihailović had been executed in the early morning hours of July 17, 1946 near the former old prison.
The commission pointed out that this was a primary gravesite from where Mihailović’s body had probably been moved to another location.
The commission members stressed that they had not found any direct data about the place and time of the murder, pointing out that they did not find a “written record“ about who, when and where executed Mihailović and added that they had drawn their conclusion based on numerous documents and testimonies of witnesses who had heard it from somebody else.
Commission member Slobodan Homen has stated that there are indications that Mihailović’s remains were moved to a secondary location and according to Radovanović, chances of ever revealing it are slim.
Historian and Secret Graves Commission President Slobodan Marković says that the location believed to be the primary grave should be scanned.
The commission members could not say when exactly the area could be searched.
According to Marković, the Secret Graves Commission has so far obtained a list of 24,000 people who were executed since September 12, 1944.
“Mihailović’s grave is one of those graves,” he pointed out, adding that it is unacceptable that families of the people executed “without any trial” did not know where and how their loved ones had been killed.
Data and documents that the commission had obtained will shed some light on history and they will play an important role in Mihailović’s rehabilitation process.
After Nazi Germany occupied the Kingdom of Yugoslavia in April 1941, then Colonel Mihailović founded on May 13, 1941 the Ravna Gora Movement, which remained loyal to the king’s government in exile.
Mihailović’s men fought against the Germans and Croat pro-Nazi Ustasha movement in the beginning but they ideologically opposed the communist Partisan movement, and engaged in a civil war with them.
The Western allies denied support to the movement in 1943 due to their cooperation with the Axis powers and progress that partisans had made. After the liberation, Mihailović was arrested on March 13, 1946 and was charged with high treason on July 15. He was killed two days later.
Mihailović’s grandson Vuk and many others have filed a request before the Higher Court in Belgrade to overturn the verdict, rehabilitate the general and reinstate his civil rights.
http://www.b92.net/eng/news/society-article.php?yyyy=2011&mm=04&dd=14&nav_id=73811