The Serbian Constitutional Court has ruled that some aspects of the law that gives the same rights to both the Partisans and the Chetniks are not in accordance with the constitution. 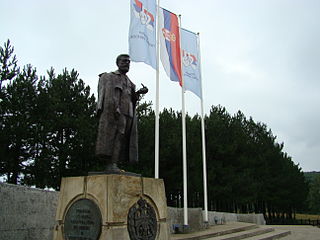 ﻿Serbia's Constitutional Court has quashed a number of clauses within the 2005 Law on the Equalisation of Chetniks and Partisans, ruling them unconstitutional.

As a result of the court’s decision, members of the Ravna Gora Chetnik movement are not entitled to a number of welfare benefits enjoyed by the former Partisan fighters.

However, they will still have their pensions and the right to be rehabilitated.

The law on the equalisation of Chetniks and Partisans stipulates that the WW2 Chetniks are entitled to the same state pension as the Partisans, their former enemies.

However, the former Chetniks are yet to receive any money because the decisions by the commission which deals with the WW2 fighters’ pensions are being blocked by some ex-Partisan members of the commission, who strongly object to the law.

Around 3,000 pension requests made by ex-Chetniks are still awaiting approval.

According to the 2005 law, both forces contributed equally to the fight against German occupation in the 1940s.

The Yugoslav Partisans, led by Josip Tito, were essentially a Communist army, while the Chetniks, led by General Draza Mihailovic, were monarchists.

The two forces were bitter enemies during the Second World War, with the Partisans accusing the Chetniks of collaboration with the Germans. After the Communist takeover of Yugoslavia, the Chetniks were banned.

The organisation representing the former Partisans, SUBNOR, has greeted the court’s decision to abolish some welfare benefits, saying that helps prove their claim that the Chetniks were never an antifascist movement, but only an embarrassment to Serbian people.

The Ravna Gora movement says that it will probably appeal the ruling at the European Court for Human Rights, as the decision to quash their rights was not within the competence of the Constitutional Court.

After the adoption of the law on equalization, a number of high profile monarchists were officially rehabilitated, including Prince Paul, the former Yugoslav regent deposed in 1941 by a coup, and Slobodan Jovanovic, the President of the King’s government in exile.

The rehabilitation of Dragoljub Draza Mihailovic, the WW2 leader of the Chetniks, is ongoing.