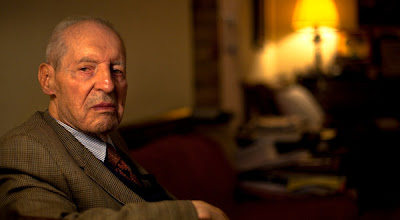 George Vujnovich, an O.S.S. agent in World War II who oversaw the rescue of more than 500 downed Allied airmen from German-occupied Yugoslavia, his parents’ homeland, died Tuesday in Queens. He was 96.

His death was announced by his family.

To his friends and neighbors in his Jackson Heights neighborhood, Mr. Vujnovich was a businessman who supplied parts to aircraft companies. But in October 2010, he was formally recognized for organizing one of the greatest rescue efforts of World War II when the Army awarded him a bronze star in a ceremony at the Serbian Orthodox Cathedral of St. Sava in Manhattan.

During a six-month period in 1944, Mr. Vujnovich (pronounced VOIN-ovich), an Army officer serving in the Office of Strategic Services, the forerunner of the Central Intelligence Agency, ran a vast aerial rescue mission that succeeded against formidable odds.

He supervised Operation Halyard (a code name chosen at random), resulting in the rescue of Allied airmen, many of them wounded or sick, who had been hidden from the Germans by villagers and guerrilla fighters in Yugoslavia’s Serbian region. Many of the airmen had parachuted from planes shot down during missions to bomb the Romanian oil refineries fueling the German war machine.

Halyard began on Aug. 2, 1944, when a three-man O.S.S. team, taught by Mr. Vujnovich to blend into the local population, parachuted into Serbia to help villagers and stranded airmen carve a landing strip for rescue planes in mountainous terrain at the village of Pranjane.

“I had to show them how to tie their shoes and tuck the laces in, like the Serbs did, and how to eat like the Serbs, pushing the food onto their fork with a knife,” Mr. Vujnovich told The New York Times on the eve of his medal presentation, describing his training of the operatives.

The mission, run by Mr. Vujnovich from an O.S.S. station in Bari, Italy, proved flawless. A total of 512 airmen, most of them Americans, were flown to safety in Army Air Forces transport planes based in Italy without a single casualty or the loss of a plane.

The first four C-47 transports sent to pick up airmen at Pranjane arrived at the makeshift, unlit runway at night. But those landings were deemed too dangerous, so later flights were made during the day with large contingents of fighter planes providing cover. The nearest German troops were 30 miles or so away, and the guerrilla army sheltering the airmen secured the terrain close to the airstrip. German aircraft never noticed the runway. Most of the airmen were picked up at Pranjane, but some were rescued from improvised runways elsewhere in Yugoslavia.

George Mane Vujnovich was born on May 31, 1915, in Pittsburgh, a son of immigrants from Serbia. He was studying in Belgrade with hopes of becoming a doctor when the Germans overran Yugoslavia in April 1941.

Mr. Vujnovich married his Yugoslav girlfriend, Mirjana Lazich, a teacher, soon afterward, then fled with her to Turkey, Jerusalem, Cairo and finally West Africa. His new wife went on to the United States while Mr. Vujnovich took jobs in Africa with Pan American World Airways. He received an Army commission there, and the O.S.S., learning of his knowledge of Yugoslavia, soon recruited him.

George Vujnovich in 1943,
before Halyard

Mirjana Vujnovich was working at the Yugoslav Embassy in Washington when she learned of reports that Serbian guerrillas were sheltering Allied airmen. She passed the information on to her husband, who put together a rescue plan.

The airmen were being protected by guerrillas known as Chetniks, led by Gen. Draza Mihailovich. But the British and the Americans, believing that Mihailovich was not vigorously battling the German occupiers, supported the Chetniks’ internal enemies, the Partisans, led by Josip Broz Tito, the future Communist ruler of Yugoslavia.

President Franklin D. Roosevelt approved the rescue mission, but did not allow Mr. Vujnovich to lead it on the ground, because Winston Churchill did not want him making direct contact with Mihailovich, according to an account in a 2007 book about the rescue operation, “The Forgotten 500,” by Gregory A. Freeman.

After the war, scores were settled in Yugoslavia. Mihailovich was executed in July 1946 by Tito’s forces, who accused him of collaborating with the Germans, which he denied. He was posthumously, and secretly, awarded the Legion of Merit by President Harry S. Truman in 1948, a belated recognition that he had, in fact, been a strong American ally.

Mr. Vujnovich, who left the military as a major, is survived by his daughter, Xenia Wilkinson; a brother, Peter; and a granddaughter. His wife died in 2003.

Tony Orsini, a B-24 navigator who parachuted into Serbia after his plane was crippled while bombing the Romanian air fields and was rescued in Operation Halyard, attended ceremonies honoring Mr. Vujnovich over the years.

“He was a genius in the way he put the plan together,” Mr. Orsini, a retired bank executive, said in an interview Sunday from his Iselin, N.J., home. “He was a hero.”