If it weren’t for 95-year-old George Vujnovich receiving his long-overdue Bronze Star last month — a full 66 years after he helped launch the incredible, yet thoroughly overlooked Halyard rescue mission in Nazi-occupied Yugoslavia in the late summer of 1944 — then perhaps Paul Seery’s thoughts would be elsewhere this Veterans Day. 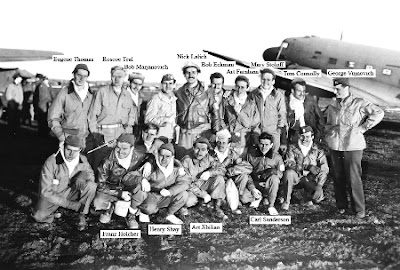 Tom Connolly (standing, 2nd from right in back row) and his crew
celebrate on Italian soil after being rescued from
Nazi-occupied Yugoslavia in late December of 1944.
Also pictured are OSS agents George Vujnovich and Nick Lalich.
Instead, they are fixed firmly on the memory of his old friend and former coworker at Emerson and Cuming, the late Tom Connolly, whose stories of rescue and adventure as a crew member on a B24 bomber had always fascinated Seery during their time together at the Canton-based chemical plant throughout the 1960s and early 1970s.
Seery, who is now retired and living in Canton, said it had been years since he had thought of those stories when, seemingly out of nowhere, he came across this article about Vujnovich in the Boston Globe, and suddenly it dawned on him why it all sounded so familiar: Vujnovich’s mission had rescued his old pal Tom.
It wasn’t just Connolly, however. As it turns out, and as Seery soon recalled from his days at Emerson and Cuming, Operation Halyard was massive; in fact, it was arguably the greatest rescue mission of World War II, not to mention the largest air rescue of Americans behind enemy lines in any war, with more than 500 downed pilots rescued — without a single loss of life — between early August and late December of 1944.
Most of the airmen, including Connolly, had been shot down over Serbia while on bombing runs to the German-occupied Ploesti oil fields in Romania. They spent the next several months hiding out in farmhouses, aided by Serbian farm families and protected by Serbian Chetnik guerillas, who were led by General Draza Mihailovich.
Vujnovich, a Serbian American working in the Office of Strategic Services (OSS), a precursor to the CIA, was the one who convinced American officials to carry out the rescue mission. It was an elaborate plan — one that involved dropping OSS agents into enemy territory, then building makeshift airstrips on mountainous terrain before sending in a fleet of C-47 cargo planes to pick up the stranded soldiers — and yet it was a total success.
“It’s such a fantastic story,” noted Seery, who has spent the past few weeks learning as much as he can about the mission, even searching local libraries for The Forgotten 500, a complete history of the rescue by Gregory A. Freeman.
Of course, the average American knows little, if anything at all, about Operation Halyard, because the mission was kept secret by the United States military for decades. And the reason, as Seery is quick to point out, has everything to do with the politics of the time, most notably the British and Americans’ waning support for Mihailovich and the Chetniks in favor of a rival faction, headed by the communist leader Tito.
Meanwhile, as the communists gained control over Yugoslavia, the credit for the rescue went to Tito and his forces, while Mihailovich was portrayed as a Nazi sympathizer and put on trial for war crimes in 1946. In America, many of the former airmen went to great lengths to clear Mihailovich’s name, even making a highly publicized trip to Washington, D.C. in an effort to declassify the documents detailing the rescue mission; however, on July 17 of that year, Mihailovich was executed by firing squad and buried in an unmarked grave.
Even to this day, Seery remembers the anger and resentment Connolly harbored, not only toward Tito, but also toward the U.S. government for not doing more to protect his hero.
“Tom and his crew even wanted to go back to Serbia and testify for Mihailovich, and the U.S. State Department wouldn’t let them go,” said Seery. “It’s a shame — one of the greatest rescue missions of the war, and all these years the truth had been kept under wraps.”
Seery also has more than just his memory to rely on. Besides conducting his own research, he recently reached out to one of Tom’s two sons, Ted Connolly, who has in his possession a veritable treasure chest of historical documentation on his father’s wartime experiences, including dozens of photographs and letters — and even a few weapons.
Ted, who grew up in a house on Pleasant Circle and attended Canton schools, remembers hearing the stories as a kid — of his father’s crew being shot down over Yugoslavia and the Chetniks helping them out. He was also keenly aware of the “disappointment in [his father’s] heart over Mihailovich being sold down the river.” 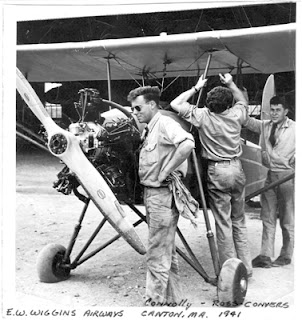 Tom Connolly (left), who was just 18 when this photo was taken,
was an airplane mechanic at Wiggins Airways in Canton, MA
prior to joining the military.
At the same time, Ted said his appreciation for the Halyard mission and his father’s role in it has grown exponentially over the years, especially as he has gotten to know various members of his dad’s crew, and in some cases, the children of crew members. He also could not say enough about Freeman’s book, The Forgotten 500, which, much to Ted’s surprise, included pictures of his father in Yugoslavia that he had never before seen.
“You’re reading the book and you flip it open, and there he is,” said Ted, adding, “The thing that amazed me is that the story we grew up hearing is exactly the story in the book, exactly the story that each one of our parents told. That I found just to be absolutely fascinating.”

Ted has also learned a great deal about his father through his own research, including the fact that he actually survived three separate plane crashes, and in one of them, his quick thinking and bravery helped save the lives of multiple crew members.

“He was a very humble man,” Ted said. “My father never thought he was a hero — you know, you did what you did because you had to do it.”

In addition, he learned that his father, who was a flight engineer and the top turret gunner on his crew, saw action not only in the Balkans, but also in France, the Rhineland, and in various parts of Italy. And he was awarded numerous citations, including the Distinguished Flying Cross, an Air Medal with an oak leaf cluster, and a Purple Heart, among others.

Interestingly, although Tom was not the pilot of his crew, the young man who was had actually worked under him at E.W. Wiggins Airways, which was located at the old Canton Airport. Tom had been an airplane mechanic there from the time he was in his mid teens. Ted said his father “absolutely loved airplanes” and used to fly regularly before joining the military, often taking part in local air shows with the likes of Bobby Draper from Draper Mills.

Ted has also since learned that his father was on board the very last rescue flight of Operation Halyard before the mission was finally abandoned a few days after Christmas in 1944. He even has the photos to prove it, including one where Tom and his crew are posing in front of a Christmas tree that their Serbian caretakers had decorated for them. Instead of tinsel they used “chaff” — the thin strips of aluminum that was thrown out of airplanes during the war in order to interfere with radar signals.

Meanwhile, as the American airmen boarded the C-47 bound for Italy, many of them took off their boots, and one by one, they tossed them down to the Serbian villagers as a final gesture of their gratitude. They did so, as Seery has since learned, because it was winter, and because most of the villagers did not have boots of their own.

It was exactly the kind of story that deserved to be told, and yet for years Operation Halyard was ignored, even as men like Connolly shared their amazing tales with work buddies and members of their own families.

Now Vujnovich finally has his Bronze Star, while Mihailovich, at least in the United States, has had his reputation restored. Still, there are many people, including Ted Connolly, who cannot help but wonder if these stories will be able to survive another generation, especially with World War II veterans now dying at a rate of about 1,000 per day.

“The stories are going away, and [these men] are passing, and it’s just a shame,” said Ted.

Seery was even more blunt about it, insisting that “somebody better write these stories down because people who know this stuff are going to be dead.”

Both said they would love to see more scholarship done on the rescue mission in the long term, although both have been actively doing their part by reaching out to others and sharing Tom’s story. And despite their very real concerns over losing the remnants of this “greatest generation,” they both continue to cling to the belief that most Americans, when it comes down to it, will not let their heroes die.

And today, perhaps more than any other day of the year, seems to offer proof of that fact.