Reviving the movement to establish a monument to Mihailovich in Washington 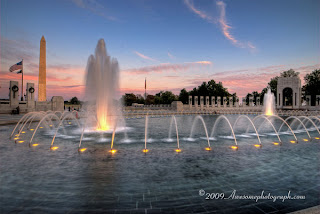 The World War II Memorial, Washington, D.C.
2009 Awesomephotograph.com
Aleksandra's Note: Years ago, in the 1970s, a movement was born to establish a monument on the grounds of Washington, D.C. to honor General Draza Mihailovich. This movement was initiated by American WWII veterans out of gratitude for all that this Serb commander did for the Allied forces that were shot down over Nazi occupied Yugoslavia and were rescued, taken care of, and returned home without a single loss of life courtesy of General Mihailovich, his Chetnik forces, and the Serbian people loyal to them. The initiative came close to succeeding, and then it didn't.
A whole lot has happened and changed since then...

Although many of those veterans who were part of this movement have since passed away, their dream should not die with them. Wouldn't it be wonderful to resurrect this initiative and somehow follow it through all the way and make it happen? Although General Draza Mihailovich never set foot on American soil his legacy left a big footprint on American history, despite the fact that many students of that history don't even know his name, much less what he did for America's sons.

It's an idea worth considering.