Lt. Col. Steven Oluic of the U.S. Army (Ret.) pays tribute to George Vujnovich on the occasion of his Bronze Star Award

Aleksandra's Note: Special thanks to Nenad Milinkovic in New York
for sharing this. 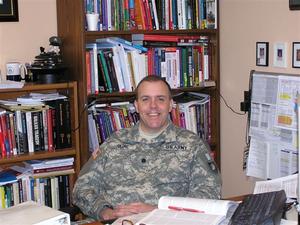 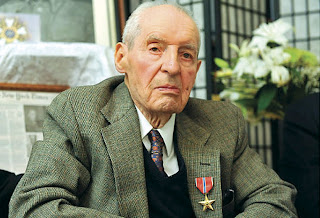 
Congressman Crowley, esteemed guests, brothers and sisters, and especially Mr. George Vujnovich, I am so very sorry to be absent from what I consider to be a historic moment in American history. One long overdue. Family matters, my recent retirement from the Army, and the start of a new career prevent me from attending this, what can only be called, a miraculous event.

Over 66 years ago, you, the then Captain Vujnovich, in concert with your wife (who should not be forgotten for her crucial role), realized that hundreds of U.S. Army Aircorp pilots and airmen were trapped behind enemy lines in Nazi occupied Serbia. Through your valiant efforts and in the face of less than supportive allies and superiors, you were able to develop, coordinate, and execute Operation Halyard. The greatest air rescue of Americans from behind enemy lines, without the loss of one life and one aircraft… an incredible feat that will echo in the annals of American military history – now that it is finally recognized. Moreover, you were able to achieve this mission with the assistance of General Draza Mihailovic, his Serbian Cetnik fighters and Serbian villagers, long abandoned by the British and other Allies to the Communists to meet a fate that has long plagued a noble and freedom loving people. I, the U.S. Army, and the United States, applaud your personal courage and sacrifice in what must have been daunting circumstances and hindrances at every turn of your efforts. Such men as you are the envy of every nation.

When Nenad Milinkovic called me in December 2009 and asked me if I could assist in obtaining recognition for you and your colleague’s efforts, I could not say no. George, you realize how the Army works, I was not sure this would happen in a timely manner, if you know what I mean… But I accepted this challenge with vigor and went to work trying to determine how do we get your most deserved recognition 66 years after the fact? After many emails and phone calls to the Army Personnel Command, the research efforts of your daughter Xenia, the use of Greg Freeman’s “Forgotten 500”, the archival material supplied by the OSS Society (I had to join their yahoo group), and the gateway of Congressman Crowley’s office, we were successful in having the Bronze Star awarded by the U.S. Army for your service. Now, my original paperwork requested that you be awarded the Army Commendation Medal and this was a problem in and of itself. The Army Awards Branch called me at West Point and said you were not entitled to the Army Commendation medal… it seems that the dates of service prevented the awarding of the Army Commendation medal. Imagine how my heart dropped and anger swelled… and then suddenly the awards clerk at the other end of the phone stated that they wanted my permission as the award submitting official to upgrade it to the Bronze Star! Of course I said certainly so and was elated beyond belief! The rest is history.

So, the process started in December 2009 and it ends today… about ten months later… after numerous interviews and phone calls… not bad for Army staff work. And you can imagine my joy for you, for the Army, for America, and for the Serbian people when I received a phone call in September on a return trip to West Point from Washington D.C., by the same clerk who told me of the upgrading of your award to the Bronze Star, that he wanted to let me know, before all others, that the Army Awards Board had unanimously recommended approval of your Bronze Star.

Furthermore, some asked me later why this was not done earlier… but we know too well the legacy of politicians and kingmakers, and how nations and people are condemned to their places in history by those who hold the reins of power. Well today, you rise like a Phoenix above the falsehoods and misunderstandings of the past and we – the U.S., your Army, your fallen comrades, and your country salute you as a true hero!

As I entered the twilight years of a 27 year plus career in the service of our country as an Army officer and son of a Serb who spent four years in concentration and POW camps, I cannot think of a better reward than to have been a small part of this recognition. It is so long overdue that some should be ashamed. But this is a time for celebration and I thank you for your service, I thank you for your sacrifice, your moral courage, conviction, and faith. You stood silent witness to the passing of your Operation Halyard colleagues, men such as Musulin and Lalich, and you never wavered or sought recognition for what you believed to be your duty in a world at war. I believe that our country today would benefit tremendously from men of your caliber, your strength, and your vision of what “could be.” George you simply epitomize what it means to be a hero and I salute you. Congratulations.