Mission Over Ploesti: The Rescue of U.S. Airmen in Serbia 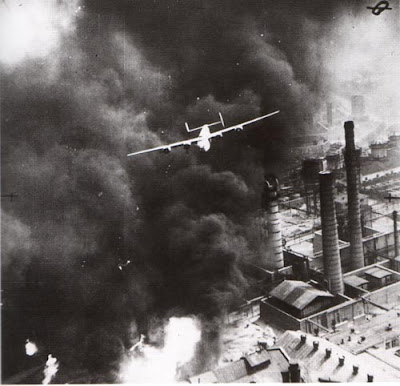 A Consolidated B-24 Liberator bomber over Astra Romana during a U.S. attack
on the Ploesti oil refineries in Romania in 1943 during Operation Tidal Wave.

On July 8, 1944, a U.S. air armada based in Foggia, Italy, consisting of 250 bombers, the Consolidated B-24 Liberator and the Boeing B-17 Flying Fortress, attacked the oil refining installations at Ploesti, Romania, flying over German-occupied Serbia. The formation was attacked by the 325 German gun emplacements ringed around Ploesti. A squadron of German Messerschmitt ME-109 fighter planes was immediately assembled to intercept the American bombers.

The Romanian city of Ploesti, located at the foothills of the Transylvania Alps, thirty-five miles north of the capital Bucharest, was surrounded by a complex of eight refineries and oil fields occupying eighteen square miles. Winston Churchill called this vital source of fuel for the German military “the taproot of German might”. Ploesti supplied one third of the crude oil needed for the German military. The 90-octane fuel needed for aircraft was produced there. The yearly production of oil was ten million tons. Ploesti was a vital strategic target and was called the “most decisive objective”. Ploesti was the source of fuel for the German military forces in the invasion of the Soviet Union and for the Afrika Korps.

The crew of the B-24 Liberator dubbed “Never A Dull Moment” consisted of eleven crew members, which included 2nd Lieutenant Richard L. Felman and Staff Sergeant Thomas P. Lovett, the ball turret gunner. The aircraft dropped its bomb load and began leaving the target area, heading for Serbia. Felman noticed a single B-17 outside the formation which he thought was one that the Germans had captured and which were transmitting their position to German anti-aircraft batteries on the ground. Staff Sergeant Carl Walpusk mistakenly thought the planes were North American P-51 Mustangs. In fact, they were German Messerschmitt ME-109s that began firing at the bombers with 30 mm shells. The bomber was severely damaged: The gas tanks were pierced, the aileron control was knocked out, there was no rudder, the fuselage, the left wing and the tail assembly were hit and damaged. The crew abandoned the aircraft, parachuting out at an altitude of 18,000 feet with a temperature of 30 below zero. Felman landed in the middle of a field greeted by 20 Serbian civilians, men, women, and children. Felman had been hit on his left leg.

The downed U.S. airmen were rescued by Serbian guerrillas under Draza Mihailovich, who controlled that stretch of territory of German-occupied Serbia. The airmen were taken to Serbian villages where they were hidden and protected from capture by German troops.

All of the crew members were able to reach the Serbian village where they celebrated. They then discovered that one crew member was absent. Thomas P. Lovett, the ball turret gunner from Roxbury, Massachusetts, was missing. Ordered to abandon ship, Lovett had stayed at his gun during the attack while the other crew members were parachuting out of the aircraft. He remained firing his machine guns until shot by German cannon and went down with the plane.

German troops had located the downed bomber and had found the body of Thomas P. Lovett who had died when the bomber was attacked by German fighters. The Serbian forces noted that 10 parachutes had emerged from the bomber. After the Germans had stripped it of possessions, the Serbian troops were able to retrieve the body.

Serbian villagers recovered Lovett’s body and held a funeral service which was attended by 300 local Serb civilians and guerrillas, officiated by Serbian Orthodox priests, which included delegates from Draza Mihailovich, and Richard Felman and the other surviving crew. The local Serbs then constructed two wooden cross grave markers with Lovett’s name, military rank, and hometown written on them, in Cyrillic and Latin letters. They gave Felman photographs of the funeral service which he was to take to Lovett’s family in the U.S. 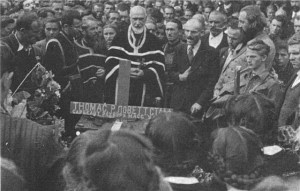 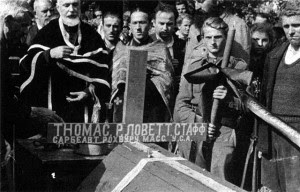 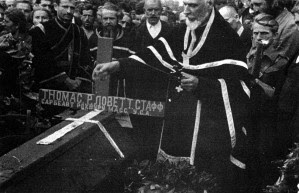 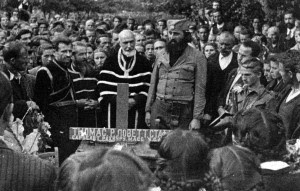 A delegate representing Draza Mihailovich and his resistance forces
at the funeral service for U.S. airman Thomas P. Lovett. 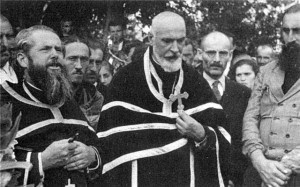 In 1945, in a letter of February 8, the U.S. War Department posthumously awarded Lovett the Silver Star “by direction of the President” for ”gallantry in action” demonstrated by his “conspicuous courage, professional skill and intense devotion to duty” as a ball turret gunner in the U.S. Army Air Corps. Lovett was also awarded the Air Medal and one Oak-leaf Cluster for meritorious achievement while participating in aerial flight.

General Draza Mihailovich would be awarded the Legion of Merit by U.S. President Harry Truman on the recommendation of Supreme Allied Commander Dwight D. Eisenhower in 1948. Suppressed, censored, and “forgotten” for over half a century, the posthumous award to Mihailovich and the Halyard mission itself would only receive grudging recognition in the 21st century. Approved by the U.S. State Department, the award would be presented to Mihailovich’s daughter, Gordana, in 2005, by a delegation of rescued U.S. airmen.